While I love the typical Elf, National Lampoon’s Christmas Vacation, and Family Stone – I really, really, love Home Alone. Mostly because this is the one movie that my children will deign to watch with me on repeat. My 5 year old says I watch it too much but what does he know? He’s only 5.

But recently we were watching it and it was the first time I saw it through mom-eyes. In the past, I would relate to Kevin – oh heck yes, let’s eat ice cream for dinner (though I would not mess with those bandits). This time though? It was the first time I watched it thinking about the mom. It made me wonder … does anyone actually defend Mrs. McCallister?

This is not a judge-y stance – but more of a curious one. I was alive when this movie was made – I was a kid myself, just a few years younger than Kevin. And I’m pretty sure that no matter what, my mom would have had to lay eyes on me before we boarded an international flight. Or any flight for that matter. And I’m pretty sure it wouldn’t have mattered if it was just me and my sister or if she had five more children. There is zero chance that my mom would have trusted the word of one of her kids that we were all accounted for. My mom would need to see if with her own eyes.

I know this because I’m the exact same way.

So, it got me thinking … did anyone watch this movie in 1990 and identify with Mrs. McCallister? Did anyone watch it and think, “oh yeah that could totally have been me!” And ALSO why doesn’t his dad seem that worried? He wanted to leave the airport and deal with it from the home in Paris. Dude. No. That isn’t how momming works. We have to do something and take some course of action. Even if it’s just sitting at the airport, waiting for a flight.

Yeah, yeah, he yells at someone on the phone. Once. And it was a French phone operator.

Kevin’s dad: I’M LOOKING FOR MY SON, HAVE YOU SEEN HIM?

Are you serious right now, Kevin’s dad? Sit down. You’re not helping. 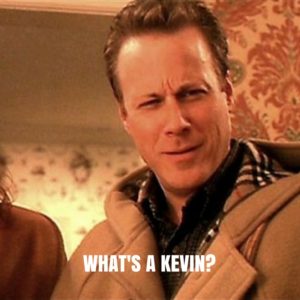 Also I can’t believe you forgot to close the garage. I would be murderous about that.

And even if they had fast pass access to zoom through security, the gate agent would insist on scanning each ticket as opposed to saying “just take whatever is left.” And yes, I know that Kevin’s ticket was accidentally thrown away – by his dad, mind you – but it still would have stopped the mad dash.

Also … what was Mrs. McCallister doing on the ride to the airport if not obsessively checking and rechecking the airline tickets and passports?

So, ok. We agree that Home Alone doesn’t work today … but even in 1990, was anyone defending Mrs. McCallister? Was anyone outraged? Or was Macaulay Culkin’s cute little face enough to make anyone believe that anything was possible? Maybe, without the soapbox of Facebook, no one really had an opinion one way or the other. It is, after all, a movie. A work of fiction.

But 1990 or not – and Facebook or not – I still can’t envision boarding an international flight without laying eyes on each of my children. Multiple times.

Of course, we’ve already established that I’m a helicopter parent. I have issues. Issues I have also passed to my husband, so my kids have two nervine parents making sure they are in eyeshot at all times. I’m also a nervous, Type-A flyer that will panic-wake at 4 AM, hours before my flight because I’m afraid of missing it.

So, I’m curious … how do you guys feel about Mrs. McCallister? Is it a plausible plot for the 90s and possibly today? Or is it an amazing work of fiction and I’m overthinking it, per usual?

Sidenote, it is an amazing work of fiction. That is not up for debate. John Hughes RIP.