I had a glaring realization prior to a session with my therapist a month or so ago:

My softness has hardened.

It’s something that happened gradually over time. I don’t know that I was ever a truly “soft-hearted” person who could be fully empathetic toward others. I am much too much of a pragmatist for that. But I could recognize the difficulties others were having, and meet them in their suffering, WITHOUT judgment.

It started with an attempt at becoming self-reliant, but in doing so I really just isolated myself. Perfectionism isn’t fun to be around, and my anxiety at having all things perceived as perfect made me a miserable human. Diving headfirst into motherhood again and again and again and again made me stronger and give me the best skillset I could have for motherhood, but it also left me jaded. Emotionally I was crumbling. The illusion of strength is a powerful one and incredibly deceiving.

Know what else leaves you jaded? Losing a parent. 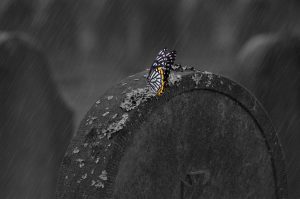 It re-frames every other loss you have experienced and sets a new standard of grief. It hardened me to the grief of others whose loss was at a greater degree of separation than the parent-child relationship. In my hardened mind, the only loss greater would be your own child or spouse.

And so sitting with my therapist, I told her I lost my empathy. I no longer felt softened toward the struggles of others. I let her see all my ugly thoughts toward others, then asked her to help me find my way back.

She said recognizing that loss of empathy is the most important step, and so now I will do the work to process my grief and past self, to choose who I WANT to become in the future and let myself become her.