Every vacation, as far back as I can remember, has been filled with kid-friendly card games during the day (and adult-only games  in the evenings). The beauty of these card games is their ability to spill out over the confines of the condo and carry us through the rest of the year. My youngest has just re-discovered the joy of playing cards and is always looking for a willing and worthy opponent. Do you hear me? ALWAYS. We’ve all taken our turns, big brother and big sister included. We’ve also all done our fair share of ‘dodging the bullet.’ Finally, one-night last week, we all gathered on the floor of the bedroom for a family game of ‘Ba-tie’ (more commonly known as Battle). There are few things in the world which bring joy to all 3 kiddos as much as ‘family stuff;’ movies, games, stories, dinners. You name it, if all 5 of us are involved, our kids are in heaven. 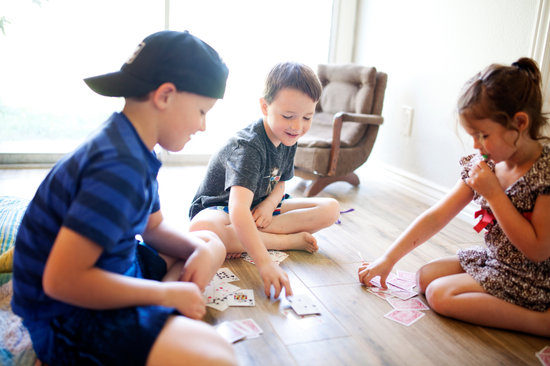 So, there we were, on a school night, past bedtime, during my busiest week of the month.  Sitting on the floor of my bedroom, everyone was giggling and the trash talking ran rampant. I still can’t tell you how he got me to agree to the game. In fact, this good idea broke through the routine-focused, rational side of my brain and dealt us all a hand before I knew what was happening. In the end, we called it a three-way tie, mainly because the 9-year-old was losing cards, the 7 old losing focus and the 5-year-old couldn’t count high enough to figure out how many were in his stack. Tucking them in to bed later, everyone was still grinning from the game. I realized that I had once again been handed a dose of something that I’ve affectionately named ‘The Parenting Paradox.’ It’s always a bittersweet pill to swallow; sweet because, it usually happens after a mom win, but bitter because it means I forgot about it in the first place.

In a nutshell, the Parenting Paradox is this: the very things that I don’t have energy for are often the ones that are the ones that (my kids and) I need most. This night, it was card games. Sometimes it’s a bike ride or building with blocks, and it always feels almost impossible, at least at first. There are always 158 reasons to say “no;” the floor could use mopping, the dryer just finished, the dishes need washing, emails need answering. But magic happens, when I pause long enough to consider saying ‘yes’ instead of answering on impulse. When I weigh the options and look into their eyes heavy with hopeful anticipation, dread vanishes, leaving room for delight, and exhaustion magically transforms into a sliver of opportunity for fun. “No” is the easy answer. It also leaves a lot to be desired. So many days, I lay in bed and wish I could press rewind. I ask myself, “what’s the harm in another round, a few more minutes or an extra chapter?”

Let me be clear, I’m not suggesting that we ALWAYS say “yes.” There really isn’t time for that and I’m not trying to be unrealistic. Blog posts about ‘the importance of being bored’ are for another day. Today, I know I have room to say “yes” more often because this season won’t last forever. My 9-year-old used to let me read to her before bed, now she chooses to read on her own instead. It seems like yesterday she was begging me to play with her dollhouse with her. Now, she’d rather ‘visit.’ It’s tough knowing that there’s an expiration date on some of these opportunities and invitations. I need to say “yes” more now, while they’re still young enough to ask.