It’s one of the first questions my kids ask in the morning, as soon as sleep is rubbed out of little eyes. Following in the footsteps of my older sister, we instituted ‘days to pick’ five or six years ago, and we live and breathe by the answer to that question. Three kids within four years left a chunk of our family life a blur. Considering those three kids have very different tastes, we needed serious methods to the madness if we wanted to keep our heads above water. As soon as they were old enough to have an opinion, they were assigned ‘a day.’ Initially, it only meant deciding what tv show was watched during breakfast (which doesn’t even happen anymore) but has since taken on a life of its own.

Here’s a list of what’s included now…
– TV shows or movies, all day (because we only watch in the living room)
– Music in the car (specific to mom’s car of course, dad has his own music)
– The coveted first seat at the snack bar for breakfast
– Choice of one of the three ‘kids seats’ at the supper table (Mom & Dad don’t move)
– Window seat in the car
– First or last in line, whichever is more appealing for whatever is happening
– The golden opportunity of being the tie breaker for any sibling disputes
– Any/all other issues that arise and require SOMEONE to go first/pick anything
(*Important clarification, Mom has the ability to overrule anything to keep herself sane.)

Since we have three kids, they each have 2 ‘days’ a week leaving Sunday as ‘parent’s choice.’ Monday and Thursday belong to the oldest, Tuesday and Friday are for our middle and Wednesday and Saturday are claimed by the youngest. The only time we break routine is for birthdays, and then we make sure it’s an even trade. There’s been much talk about switching or changing the pattern but each have something they love about the current system and so it’s never actually happened. As an added bonus, if you’re anything like me, you can’t ever have enough leverage stored up for, ahem … discipline purposes. (‘Losing your day’ is more effective than almost anything we’ve ever tried!) 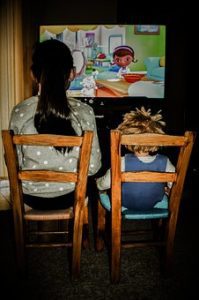 I also hope, on some level, that they’re learning important life lessons. They aren’t allowed to influence another’s decision. The rule is, “you don’t have to like it, but you aren’t allowed to (publicly) complain.” It’s not the worst thing in the world for an almost nine-year-old to sit through an episode of Paw Patrol for her younger brother. Nor will little brothers lose their mind if they have to listen to Carrie Underwood on repeat. By living through each other’s turn, they’re learning what the others like and what they can tolerate that they didn’t expect.

As parents we try our hardest to keep the playing field level and keep the youngest / middle / oldest child syndromes at bay and try to give each of them equal time at each place in life. This is one of the only ways we can figure out how to do so without reinventing the wheel every … single … day. As they continue to grow, the list will continue to evolve and I’ll keep living for Sundays.