Many people are scared to try breadmaking, but this gorgeous and foolproof artisan loaf is sure to be a family favorite. My dad, ever the staunch critic, even called it restaurant-worthy! The key to the perfect crusty loaf is just a cast iron dutch oven with a heavy lid. The big loaf I made was gone in 24 hours, and that should tell you all you need to know about making it yourself. It would be a perfect addition to the table for the holidays. 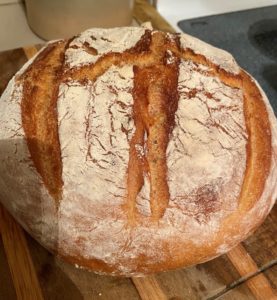 4 cups of bread flour leveled off (or all-purpose flour, but bread flour gives it that delightfully chewy texture of artisan bread)

This recipe can be made by hand or with a stand mixer, but in my opinion, bread made with a mixer is less dense and more light and fluffy because less flour is needed while working with the dough.

Although the process is time-consuming, it’s because so much of breadmaking is downtime letting the dough rest and rise, which is really the most important part. It’s actually a super simple bread recipe, and your family will likely devour it like mine did! It also makes for a nice handmade gift. Just wrap it in some craft paper or parchment paper, tie it with some twine, and attach a nice card or tag. If you decide to try your hand at this bread, don’t forget to tag @thelafayettemom on Instagram! 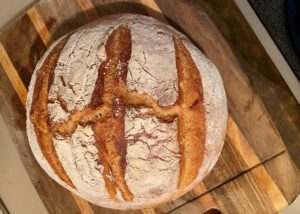