This is a tale of the most DISGUSTING motherhood moment in my nearly 9 years of motherhood.

Yes, people, we got a stomach virus. And it was the biggest shitshow of my life.

In a time pre-COVD-19, when you could actually be sick with something other than the Coronavirus… 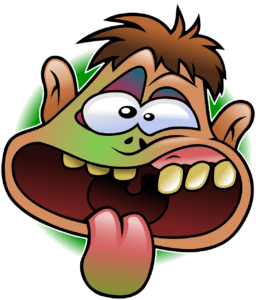 Back when we only had three children, 2012 2013 and 2015, our oldest had her fourth birthday party. She chose the menu, so of course, she chose Cheetos Puffs, her favorite chip, among other things. We also had cake and juice and water and strawberries.

At the party, I noticed my husband wasn’t looking so great, but I just chalked it up to yet another night with minimal sleep thanks to 2015. The party went well, we loaded the kids and presents into the van, said goodbye to our families, and drove home. No one was really hungry for supper, so we all ate a bowl of cereal. The kids were bathed and in bed by their usual 7:00 bedtime, and my husband and I were in bed shortly after.

Which was good, because at 8:30 my husband started vomiting. It was literally the fourth time in our 15 years together that I had ever heard him vomit (and we dated through college and saw some serious parties). It was awful. Poor love.

Then 10:00 hit. And we had to use both the toilet and a lined trashcan because sometimes we were puking together. We were woozy and dehydrated and exhausted. At around 4 am, we heard 2013 crying, and we knew. We knew. Orange vomit everywhere, just like us. Y’all, all FIVE of us had that damn virus! For 72 hours we took turns vomiting ourselves, helping the kids vomit, changing sheets, washing and drying on SANITIZE (by the way the LONGEST wash/dry cycle EVER #firstworldproblems), crying (oh wait, that was just me), and trying to survive. Our sweet family made emergency Gatorade/Pedialyte/canned soup/saltine cracker runs for us, and dropped our goods outside of our door. We slept on the floor in the kids’ rooms to help them get their vomit into their vomit buckets. It was pitiful.

We made it through and came out weak and sweaty.

And I’m not saying it was the Cheetos, because it was obviously a virus, but I have yet to eat another in the nearly six years since.

Now my husband and I think back on that and feel like badasses, but I sincerely hope we are NEVER all sick at the same time ever ever ever again.

And I still won’t eat a Cheeto Puff.