As most of the country settled into their New Year Resolutions, which apparently included attempting a coup, I’m sitting here in South Louisiana reveling in one of my favorite seasons: King Cake Season. You give me a season that’s all about cake and you make me a very very happy person. 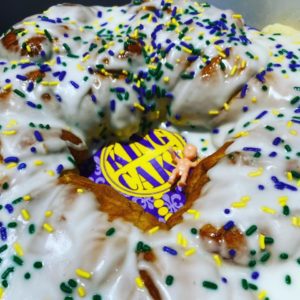 But in loving all of this King Cake and in my 35 years of research, I’ve come to the conclusion that not all King Cakes are created equal, and there needs to be adjustments to the current categories of fried vs baked.

“Who has the best King Cake” is a question that flourishes EVERYWHERE during Mardi Gras season: on social media, on the news, in the paper, in heated discussions among friends. It’s such an overwhelming question because there is a myriad of choices.

Let me preface everything I am about to say with this truth: there are no bad King Cakes. I have never bitten into a King Cake and thought “gross, I’m not finishing this piece.” All King Cakes Are Yummy.

Let’s make this complicated, shall we?

First are the fried donut style King Cakes á la Ricky Meche’s or Cajun Market Donut Company (I’m sure there are others but y’all know those are the two biggies in Lafayette). These are delicious King Cakes, if you like donuts. They are light and fluffy like a donut with all that yummy icing plus a baby inside. They come filled or plain. They are really yummy. Take a cinnamon twist, multiply it by 5, and you have a donut King Cake. But herein lies the issue for me: they taste like a donut. And for me, when I think King Cake, my brain goes to a NOLA-style brioche-based King Cake, and this just won’t handle that envie for me. In summation: donut-style King Cakes are delicious, and they are indeed King Cake, AND their own category.

Next is the Keller’s King Cake. It gets its own category because it is so drastically different from any other King Cake you will eat. It’s mystically thin and beautifully layered with filling, covered entirely with icing, and sprinkled with purple green and gold jimmies, NOT sanding sugar. It’s amazing. And when you get a sliver, you really do get a sliver so I feel like it’s maybe a more calorie-conscious option *winkwink* BUT, again, not a traditional King Cake. It gets its own category. It IS a King Cake, and it IS a Lafayette tradition, but it isn’t really a NOLA-style King Cake.

Next is the Eat Fit Keto King Cake. Obviously, it’s its own category. End of discussion.

King Cake Cheesecakes. Again, in their own category because they are a pretty big stretch to think of as King Cakes They are cinnamon and cream cheesy and decorated in purple gold and green, but are they really a King Cake? IDK and IDGAF bc they are sooooo delicious. My favorite is currently LA Cheesecake Bakery… but if anyone wants to send me their own iteration for a King Cake Cheesecake Battle, slide into my DMs.

Another category of King Cake, which is actually probably the most traditional King Cake — as in historically accurate, a recipe dating back to 14th century France — is the galette de rois at Poupart’s. It’s layers of puff pastry with frangipane between the layers. Frangipane is a confectionary cream/paste made of ground almonds and sugar. So when you pick up your galette de rois at Poupart’s it comes with warming instructions, and eating a slice warmed and crisped from the oven is nearly a religious experience. BUT this is totally different from a NOLA-style King Cake… which Poupart’s also carries… and is also delicious.

Then there are savory options now! But are they King Cakes? No cinnamon, no sugar. I do not care because I love them so. Let’s categorize them anyway!

The Boudin King Cake will change your life. OBVIOUSLY no cinnamon or sugar in sight, but this is like the meal you can eat at the parade grounds… they took boudin and crackers and made it better. So for those of you who haven’t been blessed with one of these yet, it’s boudin, and sometimes pepper jack cheese, encased in bread dough, baked, then topped with gratons and usually some Steen’s syrup. Change. Ya. Life. And for me, the boudin is what makes this so delicious, and it just so happens that the shop that makes my favorite boudin, also makes a boudin King Cake that’ll make you wanna slap ya mama: Bourques Specialty Meats on Johnston Street in Lafayette, and in Port Barre.

The sushi King Cake at Rock n Sake. It is sushi, shaped like a King Cake. And if you like sushi, you will LOVE this King Cake.

Then there are the traditional NOLA-style, brioche-based King Cakes. There are so many different ones in Acadiana, I think it’s our civic duty to try them all in our lifetime. But for me, Crystal Weddings is my favorite. Their dough is tender with a hint of lemon and not very sweet. Their fillings are AMAZING with minimal sog-factor #nosoggybottoms. They are glazed and topped with stripey Mardi Gras colored icing, and I can grab one at Little Veron’s when I’m taking advantage of daily meat special… that is a WIN in my book!

Now let me just REITERATE, that I have not met a King Cake I didn’t like.

I will tear up a Walmart King Cake in 10 minutes. Last year, at two different King Cake parties, you should have HEARD the intense discussions happening because it was SO HARD to choose favorites! And every year, new options become available because we have innovative independent bakers in our area who are rocking their craft!

So next time you ask someone “What’s your favorite King Cake?” know that is a VERY loaded question… and if you ask me, you’ll need to sit a spell, because I’ll have some explaining to do.

EAT YOU SOME KING CAKE!!!

Drop your favorite King Cake in the comments! You know… for research purposes 🙂 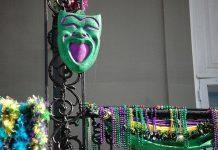