I used to be the best mom out there — you know, before I ever had kids.

I’d watch kids in restaurants on their iPads and on their parents’ phones and I swore my kid(s) would not see a screen until at least two.

I was going to breastfeed until I could not any longer.

And when it was time for real food, I was going to make it all at home from organic produce. 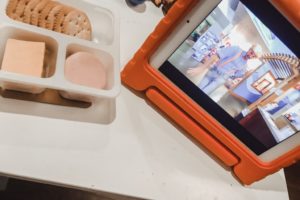 But then I had a baby.

Delivery was hard. Breastfeeding was hard. Sleep … what is that again? 😉

When the pedi said it was time for solids, I went to Whole Foods and spent a whole bunch of our paychecks on organic produce. I spent nap times cooking up the food, pureeing it, and putting it into these fancy BPA free pouches.

Out of all the times we attempted food, I bet my first born ate a total of one whole pouch of my homemade baby food. But he loveddd the pre-made stuff — and not necessarily the organic ones … as long as it wasn’t green.

At some point, we bought our baby his own iPad. I am laughing as I type. But our kid has been the one with the iPad rigged to his stroller so his parents could enjoy a glass of wine and a hot meal at a restaurant.

Sesame Street = Sanity for the working from home mama.

As my first born got older and proved to be a really picky eater, Mac and Cheese (the orange kind) was what he lived on for a bit. That and butter noodles, veggie straws, and organic milk. CAN I GET A PAT ON THE FREAKING BACK FOR THE ORGANIC MILK THAT WE CONTINUE TO PAY EXTRA FOR!???!?!

At age 3, I was feeling a bit risky and bought a Lunchable. Guess what?! He ate it. MEAT. He ate meat. And that processed, fake, overly smokey smelling meat has been his gateway to real food. He eats even real meat now! Like Thanksgiving Ham real meat.

Well, that ruined the iPad for him. He completely stopped watching A N Y T H I N G on it. It became associated with work.

Just in time for us to bring home a new baby.

But two weeks ago, he found Blippi on YouTube Kids. “Watch Blippi!” has become a welcomed request in our house. It has truly saved me as I am a little more tied down these days — nursing, pumping, rocking.

So, here I am a shell of the girl I once was.

Mac and Cheese, lunchables, cosleeping, and Blippi — all saving my life and my sanity.

And you know what? I kind of like the mom I’ve become. It works. And I wouldn’t change any of it … except maybe the 3 year old still not sleeping through the night part. But we are working on that. Always a work in progress.

So, to that perfect mom of years ago — I am so proud of who you thought you would be, but I am prouder of who you’ve become. Toss him that iPad, pour an extra tall glass, and dance around the kitchen to the glorious sounds of Blippi coming from the screen.