I grew up in a bilingual household – speaking German and English. While there are several methods to teaching another language, we used two main methods. We practiced the One Person One Language (OPOL) technique. My mother spoke to us in German and we spoke to my father in English. This technique works well for families in which only one parent figure knows the other language. Growing up, we spend our whole summer visiting my mother’s family in Germany. At home in America, we found families with other small children to play and speak with. While visiting these friends are their house or at our house, it was also commonly known that German was the expected language of communication in contrast to a setting such as school where English became the primary language.

Being married myself with 2 young children, it was equally important for me to pass on the language and other cultural aspects as much as possible. While I have attempted to find other young German-speaking children, I have been unsuccessful so far. Also, being that my husband does not speak German either, I opted for the OPOL technique.

Here are some things that I have done to help facilitate German language learning:

Let’s face it. We all use the TV at some point to help us get something done. Whether is downtime before bed, letting them watch television while preparing dinner or at a doctor’s office to keep quiet, TVs and iPads can be quite useful. I have switched the language over to German as much as possible. Disney+ has all their shows available in a multitude of languages and I have yet to find something on the streaming service that isn’t available in German. I have also used YouTube frequently to pull up older shows and songs that may be available for viewing. 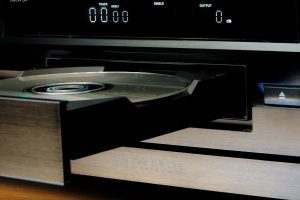 CDs:
I ordered a few audiobooks and children’s songs to listen to in the car instead of the radio. The audiobooks are particularly helpful as it’s a great way to introduce new words to my kids, just as reading a book would. The children’s songs are exactly the songs she would be learning if she were at a preschool in Germany.

Cooking:
Early childhood studies show that narrating your day-to-day life can help in language learning and practical life skills. Food is also a large part of culture no matter which nationality or language you are studying. Together, we have watched recipe videos of typical German cuisine and bonded over cooking in the kitchen. 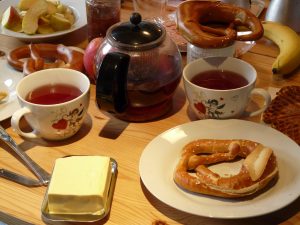 Video Calls:
Today’s technology has made staying in touch with family and friends in various parts of the world so easy. While Facetime might not be an option for everyone, depending on phone choice, WhatsApp and Facebook Messenger have similar video chat features making this an option for both Apple and Android users. While in an ideal world a reoccurring date and time to video call would be great, I more frequently find myself on an early Saturday morning reaching out to family and friends to see who is available to chat. 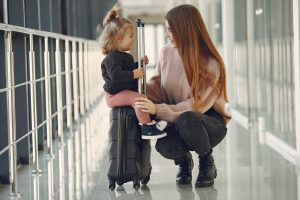 A trip abroad:
This summer, I took my 3.5 and 1.5 year old to Germany to visit family. It was the first time as a mother myself in large part due to coronavirus restrictions. Prior to this trip, my 3.5 year old understood everything I said to her in German but, more often than not, responded in English. Within 2 weeks of our extended summer trip, she switched to German as her primary communication method. I was amazed at how quickly she caught on, learned new words, and felt more confident in her abilities to speak German. Even my 1.5 year old was speaking single words in German. By far, immersing my children in the language and culture has been the most effective way I have been able to pass on the language to my children.

It’s no easy task raising a bilingual child and certainly requires a good amount of consistency and persistence in communicating with a small child. While I didn’t always appreciate this from my mama when I was a child, I am thankful for the ability now. I hope one day my children will be fluent and thankful as well.