I started out my child’s diapering journey using disposable diapers – not loyal to a particular brand. We tried Huggies, Pampers, Luv’s, Kirkland Signature, Up & Up, Parent Choice, and Honest Company. Come to find out that our little one had folliculitis (an irritation of the hair follicles which caused her butt to stay in a constant red and irritated state, not matter which brand of diaper we used). Out of desperation, I came across cloth diapers. The internet made it seem like it was common, but I didn’t know anyone who cloth diapered their child to ask the multitude of questions I had. Just like disposable diapers, there were so many different brands, so which is the best and which one should I get? I honestly had no clue what I was doing, despite reading several articles. So here’s what I learned from my cloth diapering journey:

First and foremost, I learned that the more I talked about cloth diapering my child, the more I found other parents who also cloth diapered their children. Some were already past the diapering phase of their life and spoke fondly of their memories sharing tips that helped them and other parents were interested in trying but had never heard personal success stories to help them take the plunge. My first question I posted on a local mom Facebook group and I got some helpful information. Some extras I got out of this is that there is a “Cloth Diapering Mamas” Facebook group primarily as support group and can ask questions about how to create cute cloth diaper displays in a nursery, diaper inserts or routines for washing/folding. Another group that was recommended was “Fluff Love & CD Science” which is a group dedicated to assisting parents with a proper washing routine. You can send pictures of your washing machine settings and preferred detergent type and they will help you establish a wash routine that will keep your diapers perfectly clean. Finally, I learned of “The Cloth Option,” a non-profit dedicated to helping families acquire a set of cloth diapers free of charge.

Pockets, Covers, All-In-One, Flats, Fitted, Liners, PUL, wet bag, rise. There were so many terms thrown around it was easy to get overwhelmed. Here is a quick breakdown on each type: 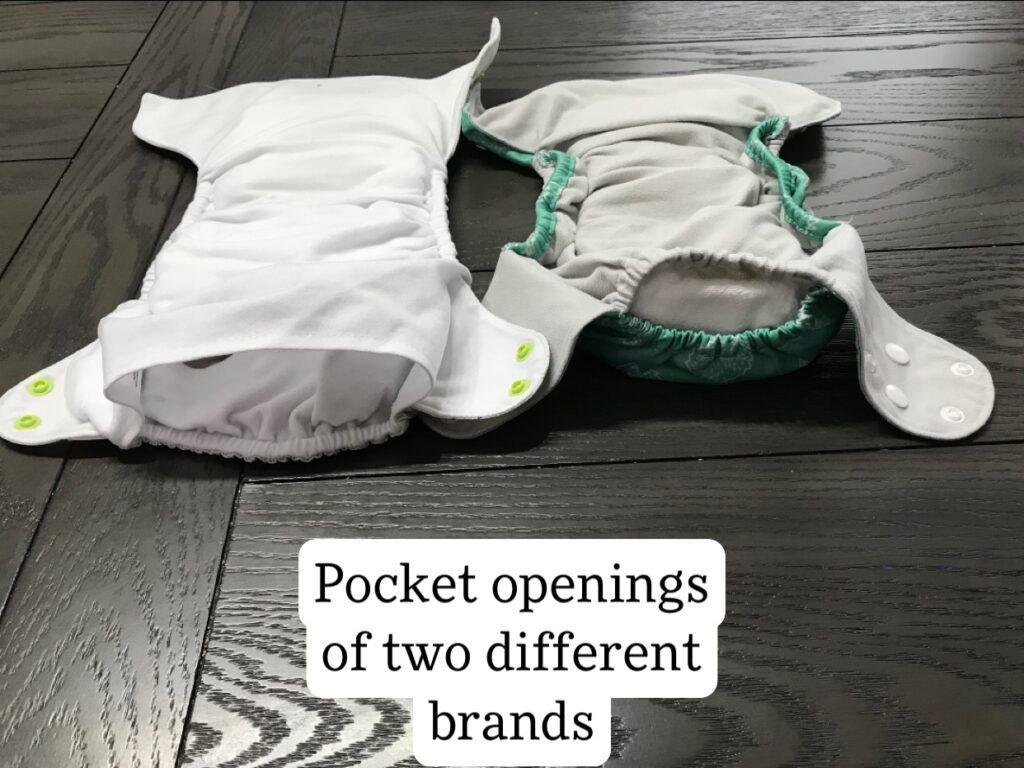 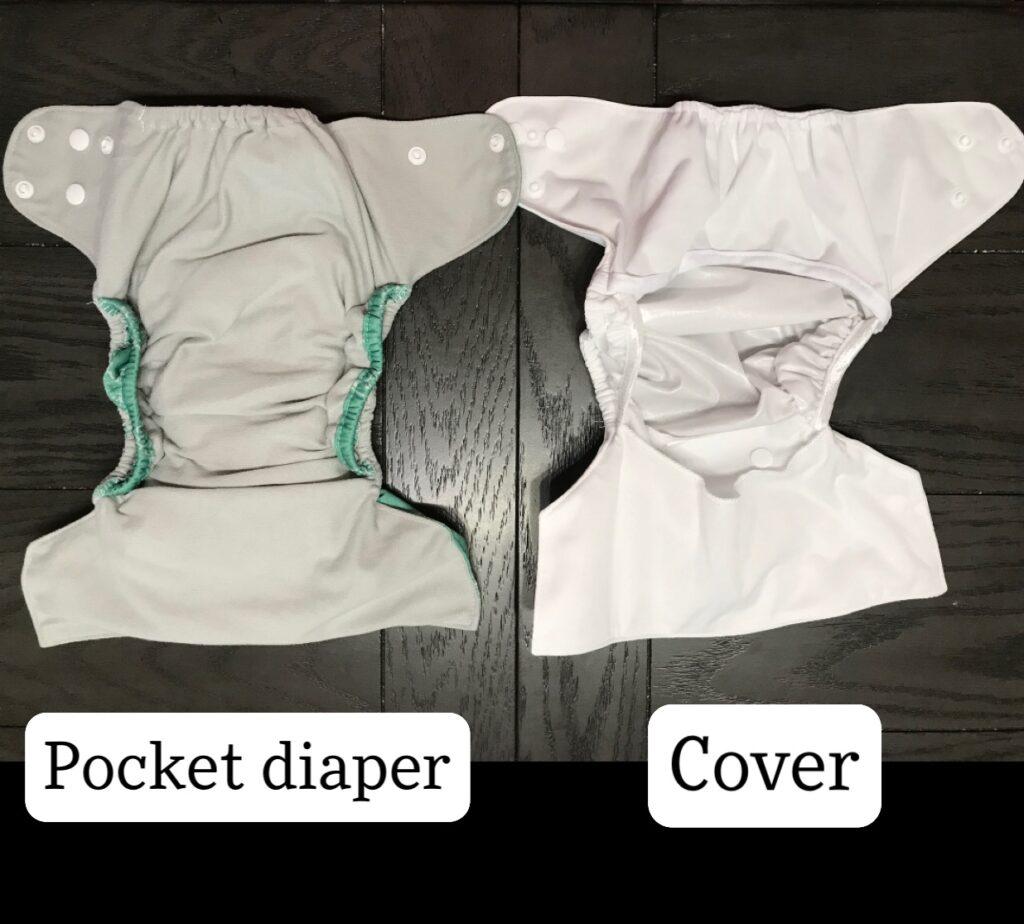 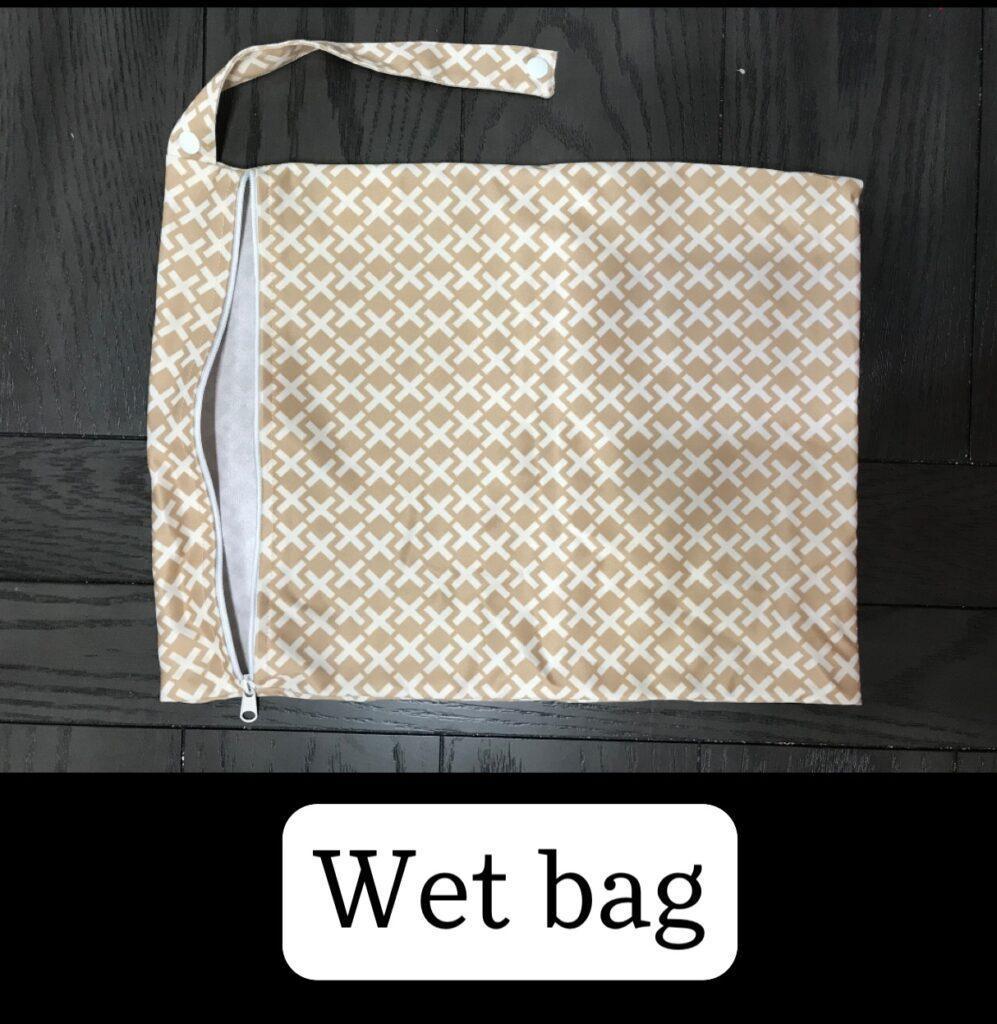 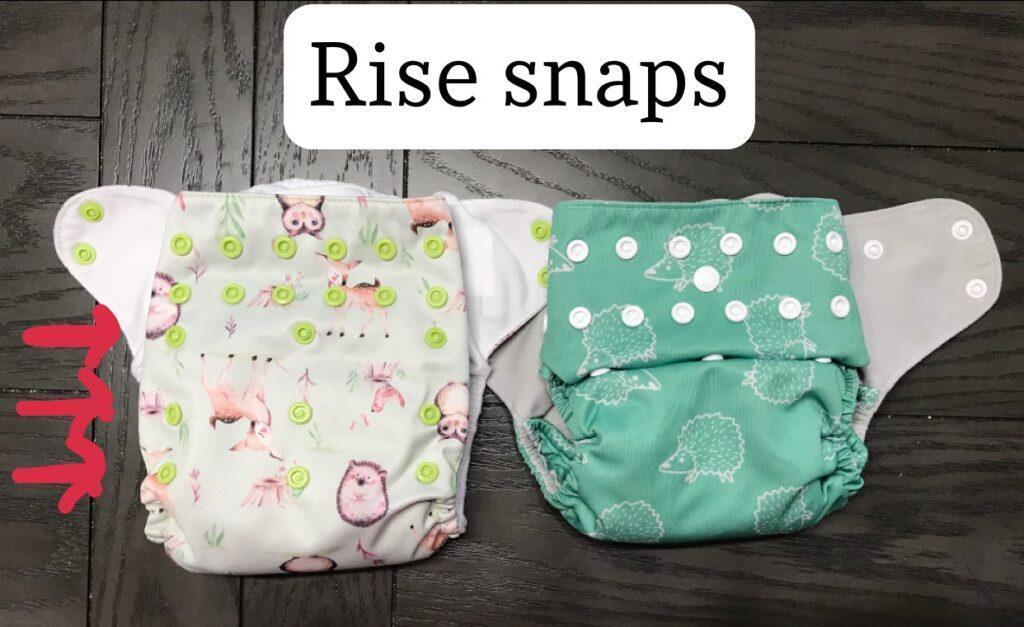 This largely hinges on how often you wish to wash cloth diapers. I opted to wash twice a week – and working in retail with split days off, it was on Wednesday and Saturday. This divided my week fairly evenly. It also meant that I had to go 3-4 days between washes. Given the average of 10-12 diapers per day (and even less as the child gets older and can hold it longer), I ended up with 38 diapers. This left me with a safety supply in case I was feeling extra lazy one day. From browsing on Facebook, there was a large range in number of diapers owned, from stashes comprising of only 12 (requiring a daily wash) to literally hundreds of diapers. It does require some personal constraint to avoid purchasing all the cute prints that exist.

Majority of cloth diapers come with snaps, however; some do carry a velcro close (also referred to hook and loop) option. Snaps are generally going to be more durable, more difficult for the growing toddler to undo themselves. These can be thrown directly into the wash and generally remain on their fit setting during the wash cycle. On the contrary, they can be a little more time consuming during diaper changes, particularly with a wiggling child and are only customizable to the extent that the snap must be closed where a snap is sewn on. Some hook and loop brand options are BumGenius, Thirsties, and GroVia. These are truly customizable in the waistline and quick during a diaper change. However, slightly easier for a toddler to take off themselves, and the velcro must be closed shut before putting in the wash to avoid snagging and fraying other items during the wash cycle. They are also less durable as the velcro will eventually wear out.

Truthfully, I never paid attention to how many gussets a disposable diaper had, until I started cloth diapering. Disposable diapers have double gussets (though I’m not sure how much protection that second layer adds). With cloth diapers, majority of them are single gusset. A few have double gussets and these are the ones I reach for first when doing a diaper change now a days. The extra layer or gusset provides just a little more protection from any potential leak from lots of pee, a compression leak in the car seat (similar to wringing out a wet towel) or losing track of time. It helped those who helped me take care of my child also by avoid a new outfit change from leaks – the most common complaint of cloth diapers. 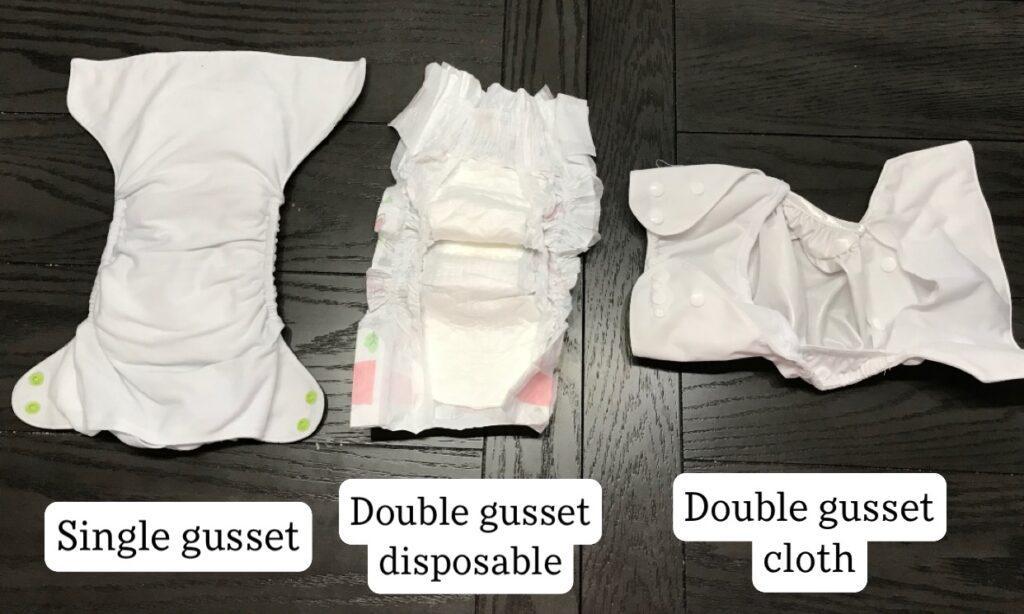 The rule of thumb is every 2 hours or when you notice an excrete of waste otherwise. It sounds like a lot but I noticed myself going to the bathroom about that often. While these is no blue line like that of disposables, the diaper insert becomes firmer as it absorbs more liquid. I am also a firm believer in the fact that my young toddler learned to potty train because she felt herself getting wet in cloth diapers.

There are lots of phases of number 2 – if breastfeeding, the yellow seedy version, liquid or solid. Each type warrants it’s own disposal method. While they say that breastfed waste is water soluble, I did not want to find out using my own washing machine and opted to rinse in my utility sink before adding to my washing machine. Once I started adding table food to the equation, this also was also reevaluated. There is the “dunk and swish” method which uses the toilet and the toilet water to dunk the diaper into the toilet and swish it against the toilet to remove solid waste from the diaper lining. This takes practice to do well. A much neater alternative is to purchase a toilet sprayer (Amazon has several options) which attaches to the side of your toilet and acts as a bidet. With this, you can use the water to spray waste into your toilet and flush it as you would otherwise. Bonus is you get a bidet out of this situation.

Ultimately, I had to purchase my first set of cloth diapers to try out and learned what was best for me, my child and my childcare situation. Now I’ve got these diapers to reuse for our next child and am saving the planet, one diaper change at a time. Stay tuned for future blog posts on my personal experiences cloth diapers! But if you cloth diapered…

What worked best for you? 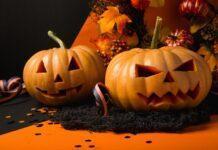 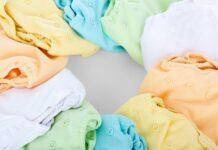