I remember going to Target when I was pregnant with #2 and falling in love with a beautiful blue and white woven blanket. This one didn’t go on my registry. Did I even have a registry for my second child? I don’t remember. This blanket came home with me right away and I knew that my son would be swaddled in it months later. 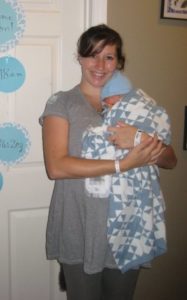 Blankie, 2 weeks later we even dressed him up as Linus and curled his arm around Blue Blankie in his stroller as we trick-or-treated with big brother dressed as Charlie Brown. Perhaps we are responsible for his attachment that he had with Blue Blankie as he grew older, or perhaps he was just destined to love this blanket from the beginning. Either way, the two were inseparable. Blue Blankie became a staple item that needed to be included in the diaper bag wherever we went.

He also was thumb sucker. Blue Blankie in the left hand, right thumb in the mouth. That’s how #2 rolled. He is a creature of habit. Eventually he grew out of his “need” for Blue Blankie, and I noticed one day that he no longer sucked his thumb to help him go to sleep. Sha, my big boy.

However, another habit started to develop around first grade: skin biting. Or chewing. Perhaps it was related to thumb sucking and the comfort he got by having his hands near his face. Perhaps he is just genetically predisposed to having anxiety. He started by biting his nails, then the tips of his fingers and eventually he began biting the palms of his hands near his wrists. He would chew them until they bled. And then it was painful!

We tried bandaids, gloves, hand sanitizer, making him sit on his hands, physically removing his hands from his mouth, verbally telling him to stop every time we noticed it – nothing worked to stop the habit. Gloves worked the best, though. He wore them around the house when we noticed him chewing his hands. However, we knew he had to be chewing them at school because they would be so raw by the end of the day. We talked about sending him to school wearing gloves, but we didn’t want him to have to explain himself to his friends and they would get in the way of writing, typing and using the iPads.

We noticed that this habit was mindless. It would happen when he was watching TV, but it was also triggered by anticipation/stress: playing a game (he HAS to win), doing school work, baseball practice, etc. His teachers noticed his habit as well that would only get worse when he was taking tests.

During baseball games, I saw my son chewing on his hands on the field. I didn’t want to yell across the field, “HEY! GET YOUR HANDS OUT OF YOUR MOUTH!” But I also couldn’t wait until the end of the game to tell him to stop. What good would that do? How can we break him of this habit without repeating “get your hands out of your mouth” or “stop chewing on your hands” a million times a day? Or without having to say it in front of people, drawing unwanted attention to the situation which would potentially embarrass him? How can we remind him unless he is standing right next to us? 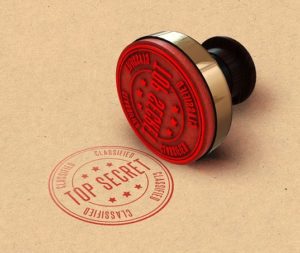 We decided to create a code word. A single word. He spent some time choosing a word that would help him remember. He settled on a word that he made up: chickie. He thought this word was funny and he loved that no one else, not even his brother and sister, knew what this word meant. It was a secret kept just between Mommy, Daddy and him…and eventually we let his teacher in on the secret as well. She could pass by his desk and whisper, “Chickie,” and none of his friends would know that he was being corrected of this bad habit. I could go to the dugout and say, “Chickie,” without any of his teammates realizing what I was doing.

I noticed that this habit was becoming less of an issue over the summer. But by the time second grade started, it came back in full force. At the first Parent/Teacher Conference, we let his new teacher in on his code word.

Here we are, the first full month in third grade and so far, his hands are all healed over, still pink from so much chewing, but not so tender as they once were.

Using a code word has helped us explore alternative ways to communicate with our kids without others knowing what is happening. One of these instances is when my kids interrupt conversations (also a bad habit that all 3 of my kids have). If they interrupt me, I do not break eye contact or stop my conversation with the person I am talking to; instead, I simply lean down, grab my child’s hand and give it a gentle squeeze. This lets them know that I recognize that they are trying to get my attention and I will give it to them when I am finished with my conversation. We practiced this one a lot and they now know to put their hand in mine when I extend it to them. Then I give their hand that gentle squeeze affirming that I know what they have to say is important, but it needs to wait just a few more moments.

In what ways could using a code word be an effective way to communicate with your children?