Disclosure: This post is part of a sponsored series with the National Football Foundation’s Football Matters campaign.

Football has been a part of my story for as long as I can remember. I was raised by season-ticket holders and knew the language of the game before I was old enough to drive. Interest in the boys playing definitely helped me to ‘talk the talk’ (just being honest), but it was love for my teams that taught me how to ‘walk the walk’.  I’m a proud Notre Dame Pioneer, a die hard Rajun Cajun and I can tell you exactly where I was (in my living room, holding a 2 week old) when my beloved New Orleans Saints won Super Bowl XLIV. (WHO DAT!) But football and I entered into a long term union when, as a mom, I started to see the sport for what it offered my son.

Enter Patrick; he’s seven, full of energy and easily distracted. He loves good competition and the fast pace of the games on TV. His walls are plastered with players who have proven to be good role models. (Thanks, Drew Brees!!)  So last year, when he was finally old enough to play in our local flag football league I registered him almost immediately. Little did I know that the extent of how much football matters to our family was about to reach previously unseen depths.

The mental component of the game is nothing short of amazing to me. I have no idea how players remember each play and the exact steps they have to take in order for it to be properly executed. You can show me all the X’s and O’s, straight and curved arrows you want, and I’ll probably never understand. But, Patrick does. He took direction from his coach, knew which shape he was in the playbook and reviewed his steps, religiously, with my husband before games. (Keep in mind, this is Rec ball, he’s seven and there were only 6 different plays.) He knew where everyone else was headed during each play, but he honed in on his role and the distractions slipped away.

The fact that it takes such physical 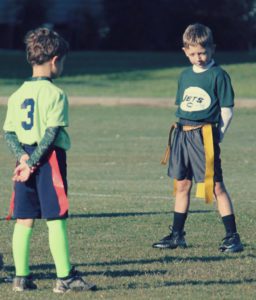 skill and mental alertness is great. Want to know what I love most, though? Football’s ability to teach players (and fans) about the big picture. It’s the team sport of all team sports, if you will. Not everyone will have the chance to make a touchdown. Few players will ever have the chance to pass the ball, force an interception or run for a first down. Every single player on any given football field, however, has an equally important role in making forward progress possible.

Our son was one of the youngest on his team last year, and by all accounts, his involvement was minimal. He was a lineman and never touched the ball outside of practice, but in the huddle that didn’t matter. Watching him take ownership of his position gave him a clear understanding of what it means to work for the greater good. It’s not about the glory, it’s about the teamwork.

And Do It Well

Our sons (we have a younger one, itching for his turn) might grow up to play safety or center. They might have the arm of a quarterback or the hands of a receiver. Regardless, I know they will spend time watching boys older or more skillful execute plays from a seat on the bench. The lessons from the sidelines are no different, in fact, they’re probably more significant.  There’s humility, tenacity and grit gained while waiting and working for your chance to shine. In football, they’ll learn how to ready themselves and take advantage of an opportunity. At a moment’s notice, their number might be called, and they’ll be handed a chance they’ve dreamed of. If they’ve been preparing like they should, they’ll be ready to rise to the occasion.

Even If No One is Watching

Practice, patience and persistence will always pay off. If someone does it better, don’t envy them, learn from them. Be aware of your surroundings and if your plan won’t work, call an audible. There are plenty of important life lessons that we hope to instill into our kiddos, but these rank high on our list and we have football to thank for bringing them to the front of our conversations. Football matters to my son, in ways I could never have guessed and so, it matters, more than ever, to me.