It’s a well-known fact, parents can’t don’t have a favorite child. I think it’s even in the parenting bylaws. The official answer is, “they all have their moments, but we love them all the same.” The good news is, there’s a loophole; we can’t have a favorite child, but we can have a favorite age. I’ve been blessed with three wonderful, spirited children and I can say this with absolute certainty: four is the best. (To be fair, my experience has only carried me through year 9. I fully expect to recant this and declare a new age my favorite, one day. I don’t see it happening during the pre-teen and junior high years that are just around the corner, though.)

What’s the first thing you think of when it comes to having a four-year-old? It’s true, they ask a lot of questions. Okay, they actually ask an endless amount of questions that make you feel like you’re riding with the Riddler. (Thank goodness they’re cute.)  But if you can handle the onslaught, you’re in for a treat. Here’s why …

Have you seen a four-year-old do jumping jacks? That alone will fill your bucket o’ giggles up to the brim. Whether they’re dancing, kicking, swinging a bat or cartwheeling across the lawn, four-year old’s approach activity with the kind of uninhibited freedom that most of us have long since forgotten about. Do we have any Friends fans in the crowd? Each of my kiddos jogged just like Phoebe.

Along the same lines as their endless energy is their unchecked enthusiasm, for LIFE. Every time I offered our son a popsicle at four years old, you would swear he won the lottery. Pizza for supper? He did a victory dance. A good day can be catapulted to the ‘best day ever’ for something as simple as a good song on the radio. My other two were the same, excited by every possibility that life had to offer and filled with the belief that nothing was too small to celebrate.

Speaking of celebrations, have you noticed that their fourth birthday party is basically the first birthday party, ever? You and I both know that it’s not, but the intensity of their joy might tell you otherwise. Or, maybe they’ve been to the park 157 times already, but for some reason, they turn four and it’s a brand-new experience. The memories they’ve made in the years before have vanished and everything happens for the first time. Can you think of anything better than a four-year-old on Christmas morning? So, take the fact that EVERYTHING is a “first,” add in the above mentioned energy and excitement, and you have a recipe for a 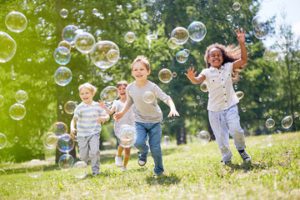 Maybe the most glorious reason to celebrate having a four-year-old is the fact that you survived the ‘Terrible Two’ and ‘Threenager’ years! That, my friend, is the real win!

So, if you haven’t yet ventured down the path of ‘Four & Fabulous’ (or you’ve had a momentary memory lapse) do me a favor and get excited for all the goodness (and questions) that are headed your way. In fact, we could probably all learn something from the unabashed, enthusiastic four-year-old approach to life. At the very least, we could all stand to celebrate a little more often.