My ability to parent without a fit of the giggles has recently been disrupted. How’s that? Well, with my child’s need to “attempt” to distract me from every situation with boo-boos.

What do I mean by that? 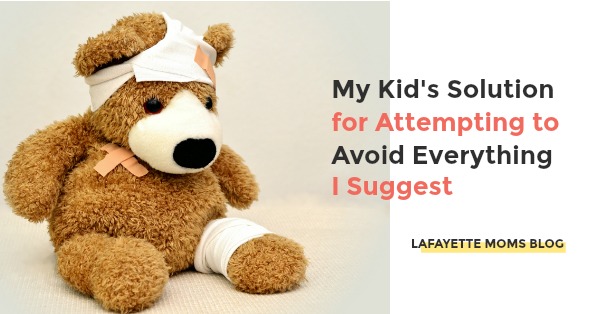 It all started a few weeks ago when the weather had changed and the need for allergy medicine at night crept into the bedtime routine. My child being self described as living a “medicine free” lifestyle (I’m sure all the mamas are familiar with this toddler lifestyle choice that is very similar to being gluten free) didn’t take well to the meds being doled out every evening.

At first he screamed. He cried. Then in a moment of clarity, he attempted to get sympathy from me by telling me just how terrible life was because he had so many boo-boos.

I kissed them and continued down the path of not hearing coughing all night with the medicine handout.

I thought that was as far as boo-boo sympathy fishing was going to go … I was wrong.

He got in trouble and put in time-out … he had boo-boos.

Time to put on pajamas … boo-boos.

He took the cake and my public parenting to a new level at Chick-Fil-A recently. In his classic 3 year old flexing of “I can make my own choices,” he wouldn’t eat fries or chicken nuggets. Yet he wanted to play and eat ice cream. He just didn’t want it enough. Instead, I laid out the deal of eat a bite and play. Which suddenly led to being covered head to toe in boo-boos. It was bad, had any of them been real he probably should have seen a doctor.

Instead, we ended up leaving with a crying child who wouldn’t take one single bite so he didn’t get to play. I had a good laugh with the mom sitting behind us at the sudden illnesses brought on by mama asking you to do something that you don’t want to do.

So mamas, how does your child attempt to get out of situations that makes you laugh?