Blame it on the fact that I’m not Cajun, but Mardi Gras doesn’t excite me like it does the locals.

You see, where I grew up it simply meant King Cake from Wal-Mart and one single solitary parade. 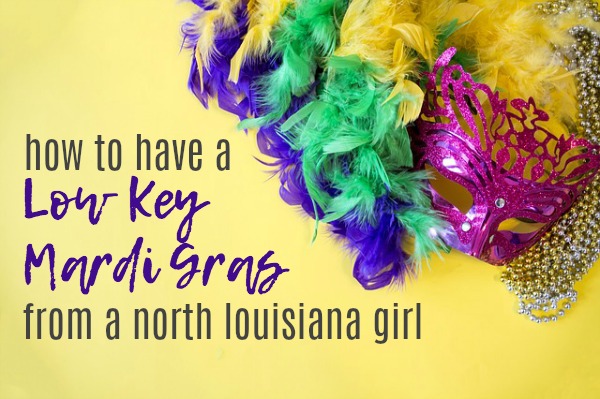 So all this nonsense makes zero sense to me. In fact, our first year living in the Cajun South, we were actually in Thibodaux. Low and behold, we had to reschedule church one Sunday during the season. I was in shock! What do you mean floats have the ability to reschedule church?

Granted our church was on the main street in town and therefore meant lots of floats would be passing by.

Next in line for my Mardi Shock was the fact that Porta-Johns lined the median through town for the entire Mardi Gras season. I lived in a state of “what on earth” and was a walking hands up in confusion emoji.

I’ve since learned how to have the most low key of Mardi Gras’s one can get by with.

In fact, other people purchase them so frequently that you can have your cake and not have to buy one. People here take this cake so seriously that at work one year, the teacher’s lounge actually had a new cake in it every single day. Every. Single. Day. It was like that job I had with donuts on pay day but on crack. We won’t talk about my weight gain from that year. It’s no one’s business.

It’ll cost you. There’s the dress. Hair and makeup for the ball. Did you purchase a table or just a seat for you and your spouse? The beads. Then the outfit for riding the float. Then there’s riding the float in this randomly frigid winter we’re having. Not to mention the other expenses that likely happen that this North Louisiana girl is unfamiliar with. It just seems costly and cold to me.

Now the next step is the most important step of all.

Step 3: Stand next to someone at a parade who is catching beads for a float rider.

In the past, we’ve come home with bags of beads. What does one do with bags of beads? Around South Louisiana you’ll see incentives to donate them to a krewe, so there’s that option. But my newly discovered solution meant that we only left the New Iberia parade with a glow stick, a glow ring, and 3 banana flavored Moon Pies. It was a parenting success. How’d I managed this bead free magic? We went to the parade with our neighbor who’s husband rides a float. She was gathering beads so he could throw them at the next parade without having to buy more. We caught. The toddler caught. We had a blast. And in the end, the beads all went home with someone else. It was magical.

Step 4: Take advantage of the time off work.

The schools down here shut down for a week during the Ash Wednesday events. Take full advantage of this, other people in this state don’t get out of school for such an event. Find some fun family activity to do; last year we went camping and loved it. Many locals I know tend to use this time to go skiing or visit Disney. Whatever you do, other people in the country likely don’t have off and it therefore makes for a great time to go on a trip.

That about sums up how low key we are about this holiday. Growing up elsewhere means I just take advantage of the Mardi-Highlights and leave the Mardi-Chaos behind. It makes for a fun Mardi Gras at our house.

How do you celebrate? Do you go all out or down play the parade season?