I really wanted to breastfeed my child. I heard other mom’s struggles –  the inability of baby to latch, the possibility of tongue ties, issues with pain and even bleeding. So to gear up for success, I took a class to learn about the ins and outs of breastfeeding. I also bought all the creams, breast pads, breast gel pads, and had my pump ready to go if I needed to keep my supply going in case of an emergency. 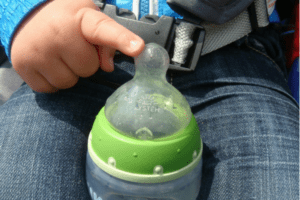 He seemed to latch on without much coaching or direction. And so began my journey of feeding on demand morning, noon, and night. The advice I got from the class was to feed when he seemed hungry – and we did just that. I wanted him to grow and be as healthy as possible, so when he said, “I’m hungry” (in not so many words – or really no words), he was fed. It actually did hurt (for anyone wondering) for the first few weeks. I toughed it out through that time, and eventually the pain subsided.

Then around week six, I began to pump for a feeding and would have my husband practice giving him a bottle in the evening when he got home. I thought if we practiced every night with a bottle, we could get to a point where I could get some rest from all those late night feedings and have my husband jump in for one feeding. I literally called it “bottle practice” and had this mentality that practice made perfect and eventually he would get it, right? WRONG!

My baby had other plans

He NEVER took a bottle. He wanted nothing to do with it. It was not the same as the breast and he knew it. So I continued to breastfeed around the clock becoming more and more stressed with the lack of sleep and no relief. I was going to have to return to work at the time and this thought gave me severe anxiety. Luckily, he was going to be across campus at the university’s daycare where I was employed, and I could pop in to feed him when necessary. This seemed ludicrous, but what other choice did I have?

Then came the parade of bottles 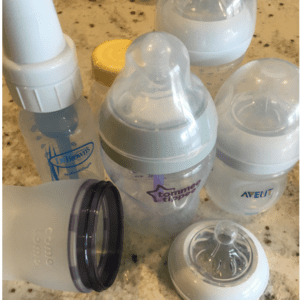 head because we struck out with each attempt. If you ask me now if I tried “so and so bottle,” I promise you my answer is “yes, yes, yes, and yes again!”

I ended up leaving my job due to an out of state move, so I suppose things work out how they are supposed to, and I could continue to breastfeed without worry of forcing the bottle on the little guy. We still gave it a good two months worth of “bottle practice” and eventually waved the white flag in surrender. Pumping an extra bottle only for him to refuse it time and time again was plain exhausting.

But I still had limited time to myself and flexibility. You see, when mom is the bottle, your schedule, your life, your time, belongs to your baby’s. You hope that they take an extra long nap that day so you can get something done around the house, and you find yourself feeding in the backseat of a car on a regular basis just so you can have an outing.

After it was all said and done

I don’t regret one second of this journey. After seventeen and a half months, our breastfeeding journey came to an end, and strangely, I was probably more sad than he was about closing this chapter. It was our thing. It was my extra time to hold him and rock him as a baby at the end of the day. It was a bond that I can’t explain and am immensely grateful that I was able to make it happen (as I know so many want to and cannot make it work). In the end, I would give up my time, my schedule, my life all over again to be the only bottle he would accept.

And to all my mamas out there who cannot breastfeed or who struggle to make it work, I just want you to know that doing the best you can with WHAT you can is all that matters. Whether that’s formula, pumped breastmilk, or if you are the only bottle, keep those babies fed and happy.