How many times a day, especially when school is out, do parents hear “I’m hungry?” Most moms joke that all their kids do is eat over summer break. For some kids, hunger is real and for others, it’s simply boredom. 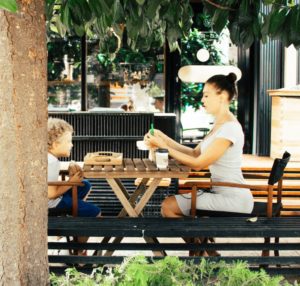 According to a USDA definition, my son spent majority of his life under the label “very low food security.” He had access to little to no food, disrupted eating patterns and lack of nutritious food. If you didn’t know his history, you’d often wonder “why is he eating again?” Or “why does he eat so much?” If we bring him to a restaurant, he will devour the free chips and salsa like it’s his job, eat his entire meal, maybe a dessert, and go back to the chips and salsa should they still be available.

Sure, he’s a growing boy. One of the tallest in his class and big for his age; he’s bound to eat more than other 6 year olds. Unlike a lot of other kids, he nearly wipes his cafeteria tray clean. And that’s cafeteria food. But ask him at any point in the day, and he’s hungry. It could be an hour after finishing a well balanced lunch, and he’s hungry. But what is hunger?

According to USDA Economic Research Panel, hunger is a physiological condition that may result from food insecurity. What does that mean? My son may actually not be hungry, but fearful that if he doesn’t eat now, there won’t be anything to eat later. This condition is still very present even after two plus consistent years of balanced eating patterns and consistent access to food.

We’ve been working to break the cycle, but it’s hard! Studies have shown that food insecurity can have long term effects on a child school success and health. When my son asks to eat, we follow-up the request by asking “are you eating because you need to or because you want to?” I’m not an expert on the subject, but I want him to know the difference. I want him to know even if he doesn’t eat a snack, the snack will still be there.

It’s sad to think how many children live this way. For some kids, the meals they eat at school are the only meals they get; there is no snack or dinner at home or wherever they end up after school. Makes you wonder what happens to those children in the summer months. There are programs that help set up through Second Harvest Food Bank and No Kid Hungry. If you’re encouraged to help, look up these resources. There are plenty of hungry children living in your area.