Disclosure :: this post is sponsored by Southern Sleep Consulting; however, as always, all opinions stated below are our own.

As I write this, I am watching a baby on a monitor asleep in his crib. Nap times haven’t been easy today, but every day is a better day. He started sleeping through the night – something I NEVER thought possible or at least not in my sunken-eyed, extremely caffeinated, near future. But with the help of Lesley at Southern Sleep Consulting, I am making sweet, sleepy dream progress every day. Let me start from the beginning.

Meet my “Spirited” Baby Who Enjoyed Snuggles all the Night Long

From the day he was born, my baby was “spirited.” That was the term I dubbed him as he screamed through the first few nights in the hospital. The nurses would come in to assist me in soothing him – I did not know such a small (less than 7 pound) baby could have such pipes, but oh did he scream. He continued to scream and wake at all hours of the night. Myself, my husband, my mother, my mother-in-law, sister, and sister-in-law were all there in the beginning trying anything to get him quiet. We tried squats, “shhhhhhs,” singing, walking, ran water, swayed over the sound machine, held him in every direction, put him in a vibrating Rock-n-Play, and even tried the hair dryer. The nights were LONG. We later found out he had reflux, and he took a prescription reflux medication which seemed to help him feel better in the short term.

He found a stretch for about a month where he slept 6-8 hours through the night in his bassinet. Then came the four-month sleep regression; an unwanted wakeup call – literally – that my little guy was not going to be an easy sleeper after all. He started waking two and three times during the night. I fed him to make him drowsy and held him upright (because of his reflux) until he was fast asleep. Then I would gingerly place him in the bassinet. We made a transition to the crib which was great until he started getting teeth around six months. Teething triggered a ten-day marathon where he woke up EVERY. SINGLE. HOUR. I made the mistake of putting him in the Rock-n-Play, and that became his bed for the next two months. I was up and down with him all night, feeding him throughout the night, and letting him sometimes sleep on me or sometimes in the Rock-n-Play. This went on for two months until I decided I desperately needed help. His sleeping habits were spiraling out of control and getting progressively worse. I was waking to soothe him anywhere from 6-10 times each night.

I knew I needed to fix some of my bad habits and find solutions to let my little guy learn to sleep on his own. I had read some books while pregnant on how to soothe and how to sleep train, but I just could not figure out how to implement the tactics on my own. I also was receiving so much advice from a variety of people and sources – to buy a certain sleep sac or swaddle, to make sure he was really full before bed, to get him outside during the day to tire him out, to pick him up and put him down until he was settled. While all of these things were not bad ideas, they just did not get my baby to sleep well.

The beginning of sleep training was the most difficult. I won’t sugar coat it at all – I cried, he cried, we all cried! The first night he slept probably five or six hours; I slept maybe three. I hid in my closet out of his sight while I timed his cries. I will be even more honest that I wanted to quit after that first night. I said to my husband the next morning, “he’s never going to get this – it’s just not going to work for him.” Then there was Lesley, assuring me that the first night was actually not so bad, providing me tips, and encouraging me to keep going and to stay consistent. She swooped in to support me when I had already mentally given up. She assured me that we were teaching him a skill that he needed. My baby needed to learn to fall asleep on his own, and he needed a lot more sleep than he was getting. I felt hopeful and uplifted upon her urging, so I kept going. 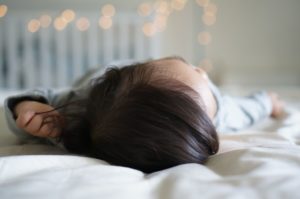 The next night was much better– he woke once before midnight and twice after midnight (very much a win from the typical 6-10 wake ups each night). Lesley watched his sleep log each day, provided me feedback and advice on when I should put him to sleep, what sleepy cues I should look for, and how to best soothe my baby. She emailed twice a day and kept up with his sleeping log which is shared on Google Sheets.

With Southern Sleep Consultant’s Support, He was Sleeping 12 Hours a Night

We continued staying consistent with our wake up time, our effort to nap at the same time each day, and a bed time routine. With continued support from Lesley and by following her written plan for our little guy, he was sleeping 12 hours a night by night five. On night six we had one hiccup during the night, but by night seven, we were sleeping all night again. The long stretches of nighttime sleep have continued. Nap times are getting better, but the sleep at night has given me the extra energy in the day to tackle whatever comes my way.

All in all, I simply don’t know how I would have achieved this on my own. Here is why I think Lesley’s services at Southern Sleep Consulting are invaluable to any mom struggling with a sleepless baby:

Your first visit with Lesley is a 60-minute phone consult (or an in- person consultation with assessment of your child’s sleep environment if you choose this package). She took the time to get to know me, the challenges with my baby’s sleep, and inform me of my options going forward. She was easy to work with and took my concerns to heart.

She does NOT push one sleep method over the other and is familiar with multiple methods to help your child sleep better. She will never force a method on you that you are not comfortable with implementing. Again, she listens to your needs and concerns and makes a recommendation based on what you wish to achieve.

She takes the time to make a detailed, customized sleep plan for your child. I received mine that day. After the initial method we chose did not work so well, she sent a revised plan the next day for us to try. It’s a tangible, easy laid out plan that I studied while going through the first few days, and something I can reference whenever I need a reminder after my time with Lesley ends. Note: she does offer follow up packages and services if you need to continue!

She also makes you a sleep log in Google Sheets so you can keep track of your child’s sleeping and awake time. She tracks this in real time to see how your day is going and follows up with advice and thoughts based on what she observes in the sleep log.

Anyone who has attempted to sleep train their baby in any capacity can understand the great anxiety and stress that it can cause a mother. No one wants to hear their baby cry. Without Lesley’s positive reinforcement and ability to get me back on track, I would have given up on day one. Her encouragement was the ONLY thing that kept me accountable and gave me the strength to keep going. Of course, I leaned on my husband and prayed quite a bit too, but her positive push each day was crucial to sleep success.

We are still on the sleep journey, but now I have the tools to implement a healthy sleep environment and schedule for my little one. I also know that I can seek a follow up package with Lesley if it comes to that! Southern Sleep Consulting has been a blessing to our home and to mom’s tired eyes. My husband and I can now actually hang out after baby goes to bed, and it is time that I have greatly missed with my husband. I am so happy that I sought her help – I would be buying a lot more eye cream and coffee if I had not.