I started dancing at age 3. My mother enrolled me in the small dance school in our new hometown at such a young age in hopes that I’d gain confidence, make friends, and find a hobby that I loved. And, it worked. I danced all the way up to my senior year of high school. I did gain confidence, I did make friends, and I spent so much time in my life working toward something I enjoyed.

When my daughter was 3, I made the decision to enroll her in dance, also.

After all, it had played such a big role in my life. I was excited to purchase her ballet shoes, tap shoes and lavender tutu she was required to wear for class. I was sure she’d follow in her mother’s footsteps and embrace the world of dance. However, it didn’t necessarily happen that way.

My daughter, Shelby, was excited about starting dancing. When she saw that lavender tutu she freaked out and wore it so much before dancing even began that I had to buy her another one. She twirled around the house in anticipation and couldn’t wait to begin. However, when it became time to start, her attitude changed a bit.

She quickly learned that while dancing is fun, it’s also hard work.

It requires weekly practice. Not play, but practice. Reviewing the same dance on a weekly basis, being reminded of the importance to point her toes, and being taught the positions became work for her, and she often fought me not to go to dancing. Some weeks, she’d hold on to me, begging me not to go. I became disheartened, thinking, “She hates it.” I feared the money and time spent would be a wash, and she wouldn’t return for the following year.

As the weeks went on, it didn’t get much better. But, eventually, the topic of recital came up. I began telling her about her recital, trying to explain to her that it would be an opportunity for her to showcase all of her hard work and wear pretty costumes. While this conversation peaked her interest, her 4-year old brain still couldn’t grasp the big picture and we still struggled some weeks going to dancing.

Truth be told, despite my love of dance, I too had my struggles. I struggled getting off of work in time to bring her to class every week. I had a really hard time remembering when pictures were scheduled and keeping up with the emails. The rule-book for the recital freaked me out and I was scared I’d miss something. This dance studio took dancing way more seriously than my small dance studio back home, and with my demanding job, I hoped I would be the dance mom I needed to be.

Then, the recital came.

We rushed there in afternoon traffic after I fought to get a full face of makeup on a toddler. We 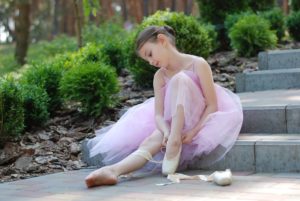 had done the dress rehearsals at this point, and while we were prepared, we were still nervous. One year of blood sweat and tears (literally) came to a head. We entered the backstage area and saw what I remember as magic. Pure magic. There’s no doubt in my mind that Shelby thought it to be magic, too. Girls with makeup, sequined costumes and high buns strutted around the dressing area while moms calmly went through all the steps required to make the show go on. The hairspray was so thick you felt it in the air and the smiles were so real and genuine you couldn’t help but smile yourself. All the nervousness went out the window and from that point forward, Shelby and I became a team.

She listened to me (which is a blessing in itself) when I dressed her and she remained still for the application of the red lipstick. She took pictures with her friends in front of the step-and-repeat and she watched in awe when the older girls walked through the dressing area in their beautiful costumes. I thought it would be chaotic, but it wasn’t chaotic at all. It was well-though-out, planned perfectly, and it was like everyone knew where they were supposed to be and what they should be doing. It was a dance we all did together, with one goal in mind: to get our girls out on that stage and put on a show everyone had been working toward for 1 year.

I watched my 4-year old in awe that night.

Normally shy and reserved, she got on the stage with a huge smile, knew all of her moves, and couldn’t wait to go back. I saw a light in her that I hadn’t seen before and I watched her as she watched the recital, in amazement at the production she was able to be part of. I gave her pink roses as a gift and we celebrated for days. We were on a high during and after the recital because though we faced our challenges in the year leading up to the recital, she did it. We did it.

Besides our victory, watching the dancers and dance moms work so hard to put on a beautiful performance was nothing short of inspiring. It was a moment that put motherhood in a whole new perspective for me. Dedication, confidence and courage are the most important qualities we can instill in our girls, and I feel as though dancing can help with all of them. The recital was yet, another, reminder that when women come together for a greater good, we can change the world. And we can put on one hell of a show.

After the recital, when it was just Shelby and me, I asked her if she enjoyed herself. She said she did. I asked if she would like to take dancing again next year, to which she said “Oh yes, Mommy. I wish to take dancing forever.” In that moment, none of the meltdowns mattered, it was worth every penny, and Id didn’t hesitate for one second when I registered her for another year. It’s so important to me that she understands the value of hard work, and I feel as though she was able to see her hard work come to fruition that night.

Discipline, confidence, and courage all wrapped up in a precious lavender tutu? I’ll take it. 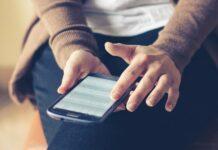