Disclaimer: Ring Security and Nest Security did not endorse this post. I’m just a big fan of their products!

By now, we’ve all heard of the fancy doorbell cameras. I just kept thinking, “That’s cool, but I by no means need or want that.” I felt like they were unnecessary, and we would never use them like you’re supposed to. Fast forward a couple of years, and we were finally out of contract with our hella expensive, crappy alarm company. I cancelled those people as fast as possible. We began looking around for a new alarm company, and my husband found out that both Ring and Nest have monitoring options available. After investigating further, we found that The Ring Security was way cheaper than what we were paying, and offered very similar services to what we were paying $63 a month for.

We ended up adding a Nest doorbell camera to our security package, because we wanted it to work with Google Home. Nest was running a special, where you got a Google Home Hub for $50 when you got a camera. So, we did that. If you have Alexa, then you should put a Ring on your doorbell too. Alexa and Ring are big buddies and work together. Nest and Google Home Hub are big buddies and work together.

Yesterday, I was in the car talking on the phone. I let the girls get down, and I stayed in the car. They ran to the door, and started talking to their dad on the doorbell. After I recovered from my panic at hearing a male voice, I started dying laughing at them just chatting through the doorbell. 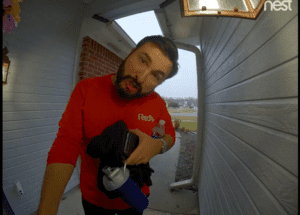 I’ll know if there’s a creepy guy going around licking doorbells in our neighborhood, because apparently that does happen.

Depending on your door location, you may see your whole front yard.

Last week, during all the crazy weather, we were out of town. I was terrified of the house flooding, so I constantly checked the yard, to see water levels.

Justin and I know the other is watching, and we are always doing fun stuff to the camera. The girls get in on the fun too and do crazy dances, etc.

I know who is at my door from the comfort of my couch.

The Google Home Hub, and my phone both alert me about who is at the door. It spots familiar faces, like the mail lady, and my mom. It also will say there’s an unfamiliar face at the door, which I usually either know, or don’t want to answer because I don’t know who it is. The girls have even learned to look at the screen to see who’s there before they answer the door. It’s a great protection for us.

Nest and Ring both have groups associated with their app where neighbors can post things their cameras have picked up. It’s nice to know to be on the lookout for package thieves, etc.

We were able to purchase our base system at Costco for $239. After you set up monitoring, you get a 10% discount on all Ring products. So, we left a few windows unmonitored for a week, and ordered the extra sensors we needed with the discount. We have quite a few windows in our 2,000 square feet, so we had to buy 6 extra sensors. Our grand total to set up the whole house with alarm panel, sensors, and motion detectors was $347. When you factor in what were were paying for our alarm ($63 a month), and now it’s down to $10 a month, we are saving $53 a month. So in 6 months, our set up costs have been recovered and now we’re saving money!

Because you pay for all security hardware outright, you don’t have a contract to sign. Our last security company had us under a five year contract. The price started out at $30 a month, not so bad, but it just kept climbing. Crappy business if you ask me. We got suckered. Never again. No contract means we can cancel the monitoring at any time and just have a really annoying, loud noise every time someone set off the alarm. Personally, I want them to call the police for me if I can’t, so that’s worth $10 for me.

So whether you choose Nest or Ring, or a combination of both, get a doorbell camera. You won’t regret it.