According to Wikipedia, Brené Brown has spent the past two decades studying courage, vulnerability, shame, and empathy and is the author of five #1 New York Times bestsellers: The Gifts of Imperfection, Daring Greatly, Rising Strong, Braving the Wilderness, and her latest book, Dare to Lead, which is the culmination of a seven-year study on courage and leadership.

Brené’s TED talk – The Power of Vulnerability – is one of the top five most viewed TED talks in the world with over 35 million views. She is also the first researcher to have a filmed talk on Netflix. The Call to Courage special debuted on the streaming service on April 19, 2019.

I just finished the new Netflix special and I cannot say strongly enough that if you are interested in personal growth, career growth, or growth in your relationships you must watch this. She shares her examples of how accepting that you will fail and living bravely anyhow is key to really showing up in your life. Vulnerability is not optional. Creativity demands it. Love demands it. Success demands it. 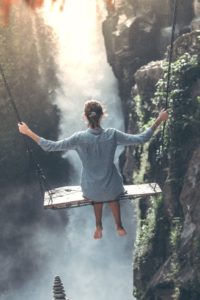 You just have to answer the call in your soul, bravely.

There are keynotes about joy and not self-sabotaging our moments of joy out of fear. She used the example that so many moms can relate to, staring at our beautiful sleeping child then immediately worrying about their deaths. Abandoning our moment of joy for fear that it will end any moment.

Brené totes a fundamental change in her life back to a chance reading of a speech that Teddy Roosevelt gave in 1910. In it, Roosevelt said:

“It is not the critic who counts; not the man who points out how the strong man stumbles, or where the doer of deeds could have done them better. The credit belongs to the man who is actually in the arena, whose face is marred by dust and sweat and blood; who strives valiantly; who errs, who comes short again and again, because there is no effort without error and shortcoming; but who does actually strive to do the deeds; who knows great enthusiasms, the great devotions; who spends himself in a worthy cause; who at the best knows in the end the triumph of high achievement, and who at the worst, if he fails, at least fails while daring greatly.”

I took it all to heart, watching through streaming tears, and decided, “Yes, Brené! I will accept the call!” I’m going to dare to go all in, to do all that I’ve let fear hold me back from. I thought I was living out loud before; I’ve had many shame cyclones in my days and even more vulnerability hangovers, but a real introspective look at parts of my life has left me acknowledging that I’m still holding back. A lot.

So with fear, excitement, and knowledge that I will absolutely fail, I’m choosing to go all in on life.

I encourage you to tune in on Netflix, then maybe go further and read the books, watch the TEDtalk, and listen to Oprah’s Super Soul conversations with Brené. Then go out and dare greatly!