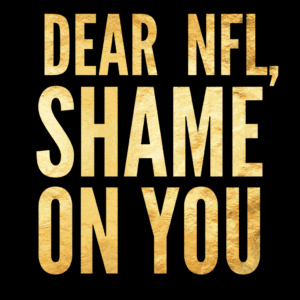 I was in the Dome on Sunday; I saw it all go down.

I walked out with 70,000 other stunned and silent Saints fans. Initially, I was sad and disappointed, but now – less than 24 hours after the game – I’m pissed.

How dare you let this happen? How dare you not give consequences to what appears to be a lazy referee at best or a rigged outcome at the worst?

And after this passes, how dare you market and sell your apparel, your gear, your posters, your teams, your players to OUR children?

We let our kids watch your games and learn about your players. We actually encourage this behavior because we believe “the game” teaches our kids about hard work, perseverance and sportsmanship.

We buy the stuff you sell because our kids (specifically our boys) look up to and admire your boys.

After yesterday’s game, a friend shared this on Facebook, “I want to tell the NFL my 10-year-old says football is stupid.”

This is from a kid who I know LOVES football. He didn’t say this because he doesn’t like the game; he said this because he witnessed a play that should have been penalized. He watched as the refs responded saying they “didn’t see” the play. He saw how the things unfolded after the foul play was ignored.

He watched the Rams kick the winning field goal.

He felt the gut-wrenching sickness every other Saints fan experienced when he realized the Saints lost.

William, this 10-year-old boy, knew the play was unfair.If this is how the game is gonna be played, well, then, he’s right; football is stupid.

Reflecting on this and reading the comments from people all over the country brought me from being a sad fan to being one angry mama.

How dare you let the missed call go without consequences?

How dare you call Sean Payton right after the game to say “sorry,” admitting there was a mistake, without giving consequences or repercussions to someone not doing their job?

As parents, we’re trying to teach our little humans to work hard for their goals, to persevere, to reach for the stars, to believe in themselves, to fight for their future and to go for the goal. We sometimes use your football teams and players as examples of hard work and perseverance.

In Louisiana, we’ve looked to our Saints, the team, the players and the season as inspiration. We’ve watched them pull together, work hard, persevere, believe in themselves, fight for their win and their city and go for the goal.

And they lost. Had it been a fair loss, then fine; losing sucks, but it’s part of life – we get it.

But in this game, a very important, BIG game, someone either didn’t do their job or turned a blind eye … and people of all ages saw it play out.

The lack of responsibility for such a big error scares me and saddens me. We let our children watch you and we’ve bought into the story you’ve sold us, “May the best team win.”

I only hope our children will not believe this is how to win. I hope they can continue to find men like Drew Brees, Steve Gleason, Ben Watson, JJ Watt, Alvin Kamara, Tim Tebow, Scott Fujita, Tim Lelito, Garret Hartley, Michael Thomas, Taysom Hill, and the many other NFL  players who I haven’t named but who still choose to share their strength of character and inspire others to work for what they believe in.

I pray that they will continue to find the honorable, respectable, hard-working people who continue to persevere for what they believe in, even if they don’t go all the way. I hope these people continue to show up so that my kids can have something bigger than the game to believe in. If this game was manipulated so that the “east coast” could play the “west coast” in the biggest game of the year … SHAME ON YOU. 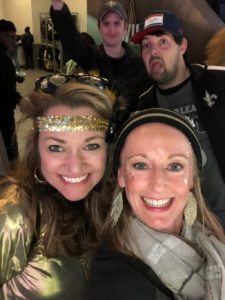 For all the moms looking for positive role models for our kids, we are lucky to be surrounded by the Saints! “Bless you boys!”