Turning a Meltdown into a Mold-up

Being sequestered into our home for nearly ten weeks has brought out many sides of our dynamic household. Unfortunately, the most popular culprit is the meltdown—myself included.

One has to remember through this shifty facade that most of the time the trigger isn’t the cause of the meltdown.

The job of the guardian is supposed to be to guide little souls through their feelings during moments of emotional terror.

—at least according to authors like Dr. Laura Markham of Aha! Parenting or the Gottman Institute, creators of Emotion Coaching.

The catch through this whole Corona debacle? I haven’t exactly been at my best to do/ lead this process.

One recent morning, I noticed my oldest wanted to spend most of the time on the couch. I prompted him to join us outside before “Academic time.” At first, he was okay but then became pretty agitated.

That’s when the arguments started. He wanted to play at the water table. Then soccer. Wore rubber boots to play goalie. Pitched fits when we scored because he couldn’t move fast enough—even though I told him to wear sneakers to boost speed.

After nearly throwing the ball over the fence, he stalked off to his room muttering some choice words. I gave him a minute (and myself after hearing the word “stupid”) before I walked inside.

That’s when I heard the sound of Legos being scattered in the room. 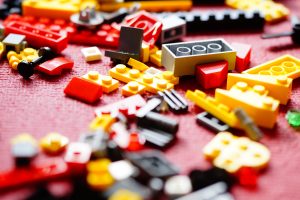 I waited for ten minutes. My other three were occupied. I took a breath and opened the door to their room. You could barely see the pink carpet under the Legos. He was nowhere to be seen.

I realized the night before I had prayed for the grace of clarity. It kept me grounded before I made my next move.

“You know. All of these Legos look a lot like the thoughts in my head and the feelings I’ve been having lately. Maybe if we sit and slowly pick them up, we’ll figure out what’s going on.”

“I know, bud. You can stay under the bed while I pick up.”

I slowly windshield-wiped the tiny blocks into piles. I focused on grace while scooping them into the bucket. That’s when I heard, “It really hurt my feelings that you were making fun of me while we were playing soccer.”

Here is where I wanted to defensively interrupt, but grace held my tongue.

“I couldn’t move fast because I was tired. The reason I was on the couch is because I’m not sleeping at night. I’m scared.”

I knew he had been fighting some underlying anxiety. We broke quarantine weeks ago due to a false appendix scare that turned out to be constipation and a random fever.

“What are you afraid of?” I asked calmly. He started to emerge from under his brother’s bed.

“I don’t know. I think there’s stuff on the walls when I try to go to sleep. I’m just scared. And everyone else falls asleep and I don’t have anyone to talk to and I don’t want to bother you.” At this point, he starts to scoop up Legos.

“Well. You should start wearing your Fitbit to bed to see how many hours of sleep you are actually getting. Not sleeping will affect your mood and health. Do you think a sleeping mask could help? I have an extra one.”

He tosses in a few blocks and then stops to ponder.

“What if I tried to make a sleepy song list on my MP3 player?”

My heart softens. “I think that’s a pretty neat idea to try.

“How about when we’re done with these Legos, we go charge everything and make that together?”

We finished the task and as we found the components to charge his items, I discovered notes that I had taken from a “Calm the Chaos” Framework that I completed last summer. It took the gestation period of a human to subconsciously understand these ideas and put them into action.

This shelter will bring out every flaw and strength that we possess. Realistically this process isn’t something I master for each of my four sons when they lose their cool. I’ve had breakdowns after this episode, and I will experience more as life continues.

What could have been another epic fight turned into a pretty significant point of connection. I know we are all struggling in our own ways. Maybe next time a meltdown happens in your house (you know it’s coming), see if you can find the grace to listen to the cause and then work together to find a resolution.

I know I will try.