We have always been a pet family – even when I was growing up, we always had animals. My husband loves cats and I love dogs so we have both. However, the one thing neither of us had ever experienced was the death of a pet when we were young. The dog we had from when I was 5 didn’t pass away until I was 18 and about to leave for college.

Before my husband and I had kids, we adopted a cat in 2007 (George). Soon came another cat in 2008 (Kibby – a three legged cat that had been abandoned on the street) and then the bane of my existence, Chicken – a cat we adopted in April 2011, just before my first child was born.

Kibby was the oldest but everyone seemed in good health. We went on to have another child and all was well with all the living beings in our house. 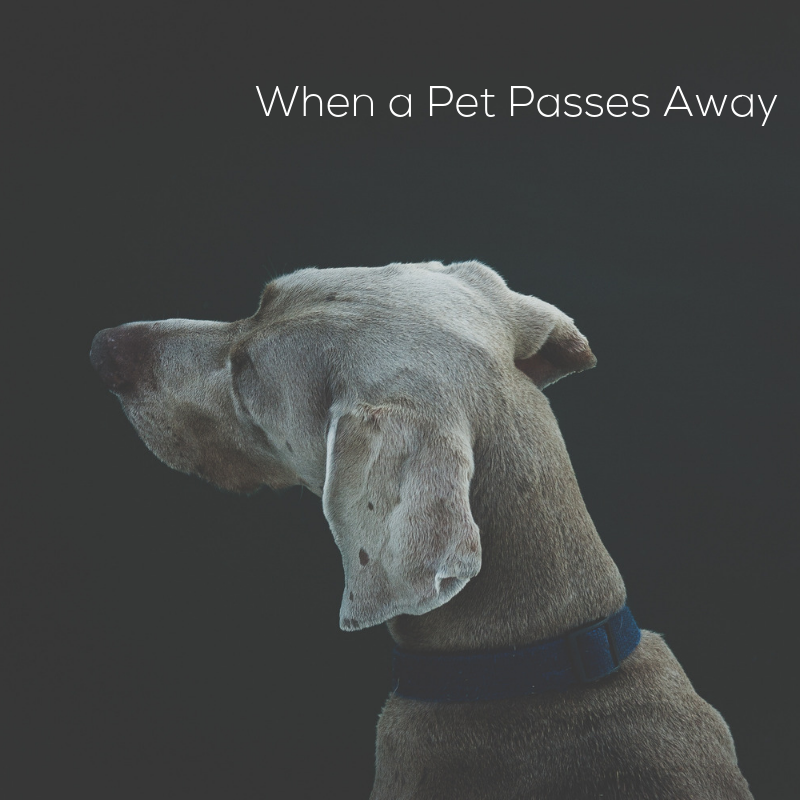 In 2015, we noticed that Kibby was meowing loudly at random times – it sounded almost like she was in pain. She didn’t move around much – she was about 16 at this point and we had had her for 8 years. She was the cat I was closest to and we often slept spooning each other. We rushed her to the vet and were told she was in kidney failure. We had to make the decision then to put her down.

But how to tell the kids?

In 2015, I had a 1 year old and a 3 year old. They didn’t quite grasp the concept of what was happening and while the knew and loved Kibby, they didn’t really seem to notice she was gone.

The following year, we adopted our first dog – Andouille, a long haired dachshund that we rescued following the flood of 2016. The kids loved Andy – he would snuggle up with them, burrow under blankets and was ever so patient with the kids. He was approximately 2 when we adopted him (not sure since he was a rescue) and I felt very comfortable that we would not have any more pet casualties for a long time.

Two short years later, just this past September, we noticed Andy was being very withdrawn from us. We had adopted another dog, Boudin, in May and they loved to play so it was strange that Andy wasn’t in the living room with her. I was afraid he had gotten out but then noticed that he was tucked behind a chair and was breathing very rapidly. We rushed him to the vet where his heart gave out and he passed away. It was shocking and sudden. What’s worse is that the kids saw him before the left for school and all seemed well. How would we tell them that while he seemed ok this morning, he was now gone?

At this point my boys were 6 and 4. My oldest has a lot of anxiety – particularly about death. He doesn’t want to die and he worries about other people dying.

How were we going to tell him about Andy?

Through our own grief and disbelief, we researched a ton. One of the top suggestions is that you don’t tell you kids that the dog was “put to sleep” or even “passed away” because these are hard concepts for kids to grasp – and sleep is something that kids do and they may be scared that if they go to sleep, they might not wake up.

The kids came home and we sat them down immediately and told them that Andy died. Immediately my 6 year old starting asking questions. He wanted to know what happened – we told him that Andy’s heart stopped working and that there was no way for us to have known or prevented it. We let them know that it was okay to be sad and that they could ask any questions they wanted to.

They both wanted to see where he was buried outside and then they came back in. We then did something they enjoy – have a movie night at home with candy and popcorn. They seemed okay and I shrugged at my husband, thinking we had done it all right.

Then the morning came.

And with the morning came unanticipated things. My youngest swore he could hear Andy barking and wanted us to go check where he was buried. My oldest said he could feel Andy still sitting on his lap. These things we were not prepared for. We acknowledged their feelings and assured them that it was because they missed Andy. They both asked for another dog – specifically “another Andy.” I explained to them that I understood these feelings – but we were having those feelings because we wanted Andy back. And if we got another dog, it wouldn’t be Andy – it would just be a different dog.

The feelings were raw and difficult. It was hard to work past our own grief to help manage our children’s grief. The following weekend, we sat down with the kids and decided as a family to channel our grief into something positive. We decided to start fostering dogs. Andy didn’t have a home until we gave him one – and while we weren’t quite ready to adopt, we wanted to give another dog the same chance to find his family.

There are still moments where I will happen upon a photo of Andy or one my kids says that he still misses Andy. I do too. But it gets easier with each passing day. And I remind them that while we didn’t have Andy long, we get him the best life we could while he was with us.