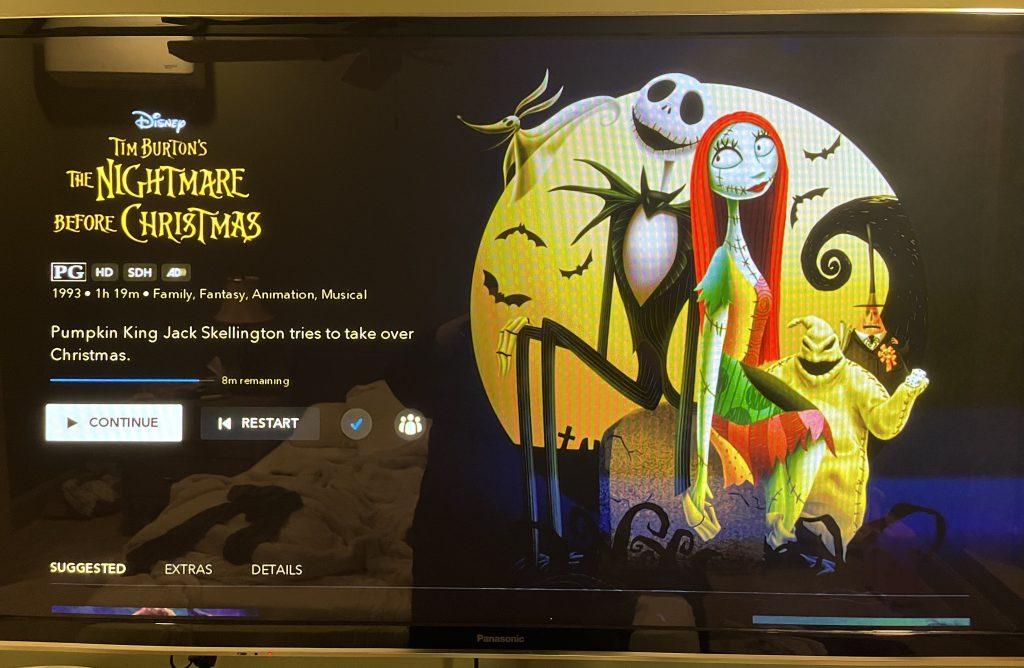 Just as fall wreaths and pumpkin fall decorations start to become littered around porch displays, another change happens inside many homes when October 1st rings into the start of spooky season: time for Halloween movies. Similarly to Christmas, there are many Halloween movies that have become cult classics such as Hocus Pocus and It’s the Great Pumpkin, Charlie Brown. Another cult favorite in our household (and many others) is the popular and first stop motion animation feature film, . And although I have been known to love many a Disney movie, my appreciation for this feature didn’t start until I was in college.

I imagine many kids had a similar reaction that I had when this movie first came out from Disney studios: terror. The movie came out in 1993, which would have made me 6 years old. I saw glimpses on the TV and thought it was plainly too scary. Years later in college I had a few friends who were excited about seeing it re-released in theaters. I joined in on the fun and watched this movie for the first time from start to finish. I was starstruck. What a story! What an impressive score! I also have a weakness for musicals – so to say I was amazed and inspired was an understatement. Danny Elfman – someone I had never heard of before – quickly became a musical genius in my eyes.

Through the years I have learned a number of surprising facts about the film, along with many misconceptions. The Movies That Made Us by Netflix covered the history of the Nightmare Before Christmas, loaded with more insights and behind the scene challenges the crew experienced. Read on to find out the 6 things you didn’t know about this musical.

Henry Selick did. Poor Henry. Very few people seem to realize it is really this amazing director behind the film. While Tim Burton had created the story back when he worked at Disney, (and actually this is where he met and befriended Henry Selick), Burton was one of the top directors in Hollywood at the time of production. With other projects on his plate, including the Batman films, he did not have an active role and instead other people were really responsible for bringing his first idea to life. Including Henry Selick. Disney ended up adding “Tim Burton’s” in order to entice more crowds to come out and watch the film in theaters. Although – that didn’t work. More on that later.

2. This movie, much like its animation, had a lot of stops and starts, and almost didn’t make it.

(By the way, did you know the film required over 100,000 stop images for animation?)  At one point, the creators had to ask (beg) for more money and Disney refused at first. However, Disney gave more time and funds so the show could go on.

3. Speaking of Disney, the first scene that was filmed for the movie was the “What’s This?” musical sequence.

The strategic reason for shooting this scene first is because it would be the most cheery, and have the cutest characters out of the whole movie – something Disney would approve of. Movie creators were afraid that Disney may nix the project if they saw some of the other scenes first, so they prioritized this scene to ensure they could continue with production.

Disney did their due diligence and tested out the final film with a children’s crowd. When they saw it was a disaster, they decided it would be better for an older crowd, such as teenagers, and knocked the rating up to PG. They also had a sister company – Touchstone Pictures – release it and added Tim Burton’s name to the title in order to draw more crowds due to his popularity. It was not a huge hit. It broke-even at the box office and went away without much notice, which was devastating to the crew who worked on the film in painstakingly detail. However a weird thing happened: 13 years later it started to gain great momentum and inspire a fanbase of admirers who would eventually make this into a cult classic. Merchandise sales went through the roof, and suddenly these characters turned beloved, popping up in countries all over the world. Disney took it back from Touchstone Pictures, slapped their brand on the film, and re-produced it. It raised from the dead, like one of the movies’ zombies.

5. Danny Elfman, the composer and singer of Nightmare’s musical track, was dating and living with who would become the show’s script writer, Caroline Thompson.

She was hoping to be asked to write the script and very disappointed when she wasn’t. Instead, the scriptwriter hired was Michael McDowell, who previously work with Burton for the Batman movies, However, he ended up battling a serious drug problem and could not follow through. Thompson had also worked previously with Burton on Edward Scissorhands and literally watched Elfman compose and experience Nightmare songs in her own home. Thankfully she ended up being offered the job after McDowell fell through. We can thank her for the wonderful characterization of Sally, among many other things.

6. There was an alternate ending.

Speaking of screenwriters, at one point, Henry Selick decided to take the plot into his own hands and change the ending. Instead of the Boogie Man dissolved into a disgusting pile of bugs at the climax, the audience would find out it was actually Dr. Finkelstein controlling Oogie Boogie like a puppet this whole time. One important person hated it – that is, Tim Burton. When he saw this version of the ending, he famously kicked an impressive hole in the wall. Thankfully – creators of the film took this cue and resorted back to ending we all know and love.