These are My Confessions …

First of all, if you are reading this and knew me as a child … or an elementary student, know that I know I am a hypocrite for taking Max’s noonie away before 2.5. You see, I had my pacifier far longer than acceptable. It was security blanket. It should have been taken away before my parents’ divorced but it wasn’t. Then, no one wanted to really fight me on the subject, except for my dear aunt. So, I held on to it … and I cannot with good conscious tell you how long I had it. #embarrassing

Because Our Children are Our Future

So, with a history of family pacifier abuse and Max’s major speech delay, I knew we would have to take Max’s away sooner rather than later. But y’all, this kid loved nothing more than his noonie. He literally was a fiend for it. When he was tinier, he would fit his whole body under his crib in search of a rogue noonie. He carried around as many at a time as he could find. #likemotherlikeson

How it Went Down

People would tell us to cut the tips off of the noonies, and they would lose their appeal. But, our precious tyrannosaurus rex was biting holes in his beloved noonies. When one was a little too holey, he would toss it and reject it but would search for a suitable replacement with gumption.

When we were buying 2-3 new packs of the 18+ noonies a week, we knew it was time to ditch the habit. We are also starting potty training (God help us!) in the next weeks, so we knew it was now or until potty trained. Which, who knows when that will be!

So, we stopped cold turkey. Yep. Cold freaking turkey. He was only getting the noonie in the car (because he STILL hates the car … well when it stops), for nap, and for bed … and of course, the extreme injustice or injury. We quit in the car first, which really has been the worst part. He is a holy terror in the car with the noonie, and it has only gotten moderately worse without it. 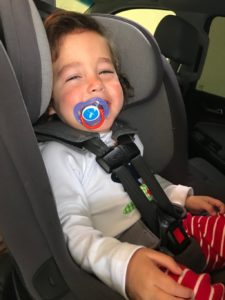 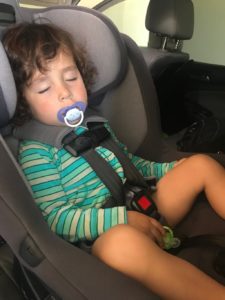 Then we cut it for nap. He goes down easiest for nap because he naps as soon as he is home from school, which is hard work. So at nap, I just did not give it to him. And he went down just fine. So, we were hopeful.

The night he did not have it for nap, we did not give it to him for bedtime. He went down (eventually) just fine.

And that was it — the end of an era. I am sitting here a week and a half into it, and he has not made contact with the subject. He did try to jack one out of a tiny baby’s mouth yesterday, but he was unsuccessful and was actually more worried about his sucker. #grown #replaceonedrugwithanother #sugarbugsfasho

The Truth of the Matter 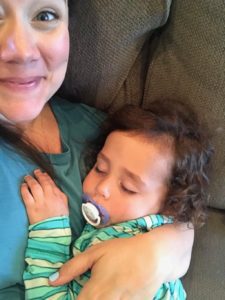 I have to tell you; I think it has been harder for me than it has for him. I had comfort in sending him with a pacifier when I could not physically be with him. I knew that most would be able to soothe him with the noonie even if it was short-lived. We do not have that assurance now. And it means my baby is growing up. Truly. He did not even search for them. He has not stood at the counter trying to reach them himself and has not destroyed his room in mad search. That makes my mama heart hurt because he does not need it. It was time. But to me, it means he needs me less, too. He is growing up and accomplishing big things. I am proud – he kicked the habit farrrr before his mama did. But, I am also a little bit sad.

Max’s noonies comforted him for nearly 2.5 years. They helped him sleep, helped him regulate, and soothed him when my arms weren’t quiet enough or not around. And as silly as it sounds, I will be forever grateful. Thank you noonie. Until we meet again …