One magical day, a mysterious package arrived on our doorstep addressed to three surprised and excited children. Waiting patiently inside of the package was one of Santa’s own, clad in a red felt suit and hat: an Elf on the Shelf. We named him Captain. Captain the Elf. 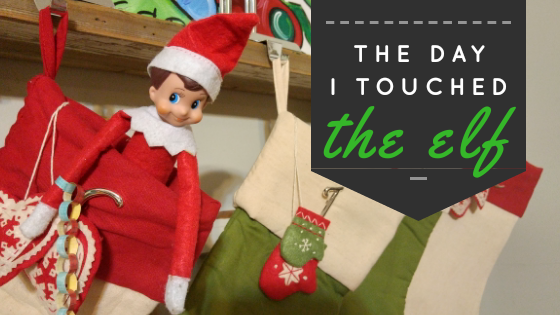 The kids squealed and danced with delight as I theatrically read the book aloud. I made sure to emphasize the sole Elf rule by reading it twice, looking each child in the eye to make sure they understood:

“There’s only one rule that you have to follow

so I will come back and be here tomorrow:

Please do not touch me. My magic might go,

and Santa won’t hear all I’ve seen or I know.”

The older two obliged while Captain made sure to stay out of reach of the baby. The year was 2013.

Oh, Captain put on quite the show for our family those first two years. He bathed in marshmallow bubbles and hung from the ceiling fan by a harness he made from a pair of the boys’ ::clean:: underwear. He baked cookies, brought hot chocolate and made festive decor. He rewarded the kids with treats for being respectful or lending a helping hand. He set up the Nativity scene and shared stories about why we celebrate Christmas. Every morning the kids raced to see what Captain had been up to while they were sound asleep in dreamland.

Then, one tragic day, Captain had a big message to share about all of God’s children living across the world. He attempted to perch himself on top of a globe. However, the globe is a sphere and poor Captain, with his tiny elf brains, did not take into account the slippery nature of his red felt suit. As the kids rose that morning and ran to find Captain, they discovered him lying face down in the middle of the floor.

Captain the Elf had fallen off his shelf.

What were we to do? He couldn’t stay in the middle of the floor until night fall! Someone would step on him, or perhaps the dog would try to eat him. The floor is not a safe place in our home. I decided he needed to move amid shouts and protests from the kids who reminded me of Rule #1 of 1: Don’t touch the elf.

So I grabbed a clothespin, which resulted in more screaming from the kids. I assured them that since I wasn’t exactly touching the elf, he wouldn’t lose his magic. He wouldn’t! I promise! The book said nothing about moving him with clothespins. Santa would want us to rescue him! He will reward our good behavior!

I delicately placed him seated next to the globe where he would be safe.

That night, my husband and I fell asleep in the living room while watching a movie. As the kids ran in early the next morning to find Captain, we jumped with a start. Captain was still seated next to the globe right where I had placed him the day before. My middle son, Leyson, turned on his heel, pointed his outstretched finger directly at me and shouted, “YOU! He lost his magic because of YOU!” That morning coincidentally had been the very first morning in two years that our elf did not move from his spot from the day before. 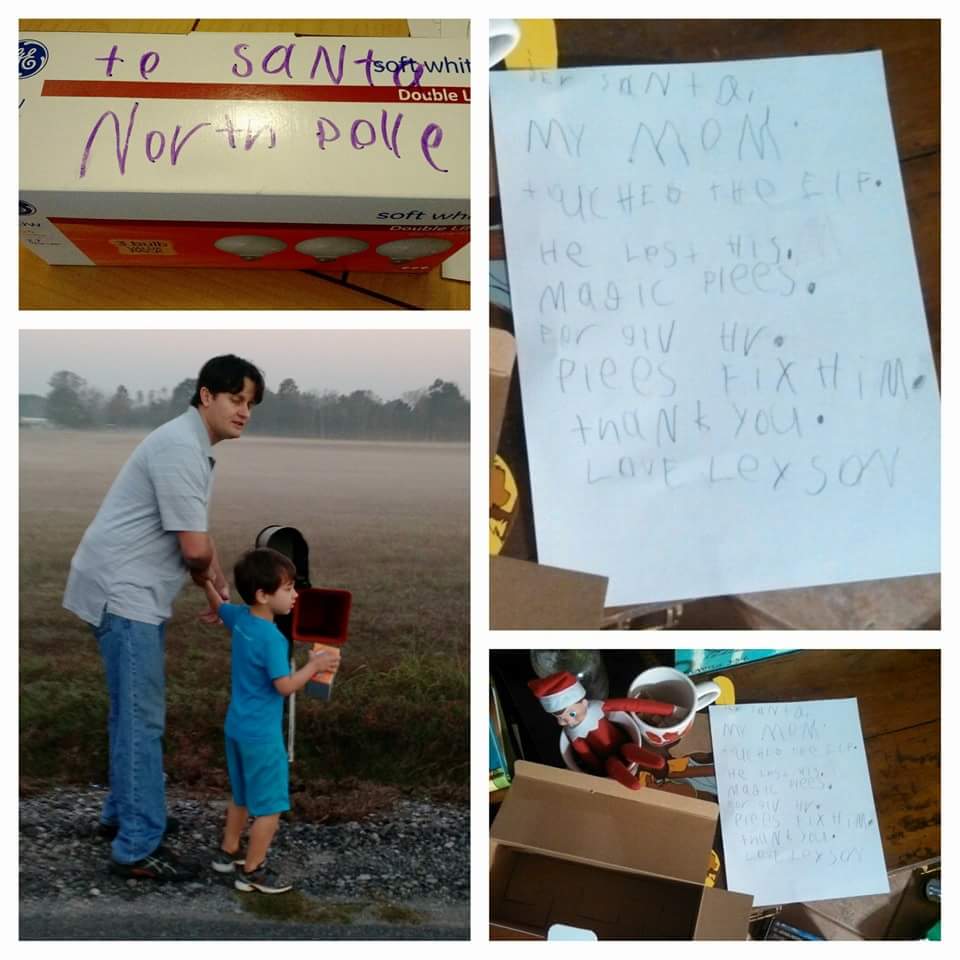 “I’m writing a letter to Santa,” said the middle child with a tattle-tale tone in his voice. He then set to work documenting my heinous, elf-magic destroying treachery as my husband prepared a box to mail Captain back to Santa. Surely his prose that begged for forgiveness on my part would move the big guy to restore the elf’s magic, right?

“Der Santa, My mom. touched the Elf. He lost his. Magic plees. Forgiv hr. Plees fix him. Thank you.

With Captain placed carefully in a box, along with the letter describing my misdeeds and the children’s pleas for mercy and elfish resuscitation, my husband and Leyson slogged to the mailbox. In a manner that mirrored a funeral procession, Captain’s package was placed in the mailbox and the red flag that symbolized my betrayal of Elf Rule #1 was raised in hope.

Thankfully, Santa offers pretty good health benefits for his employees, but not much paid time off. Captain the Elf was back on the shelf early the next morning. He was bandaged and bruised, but still wore that same, cheery grin with a twinkle in his eye. 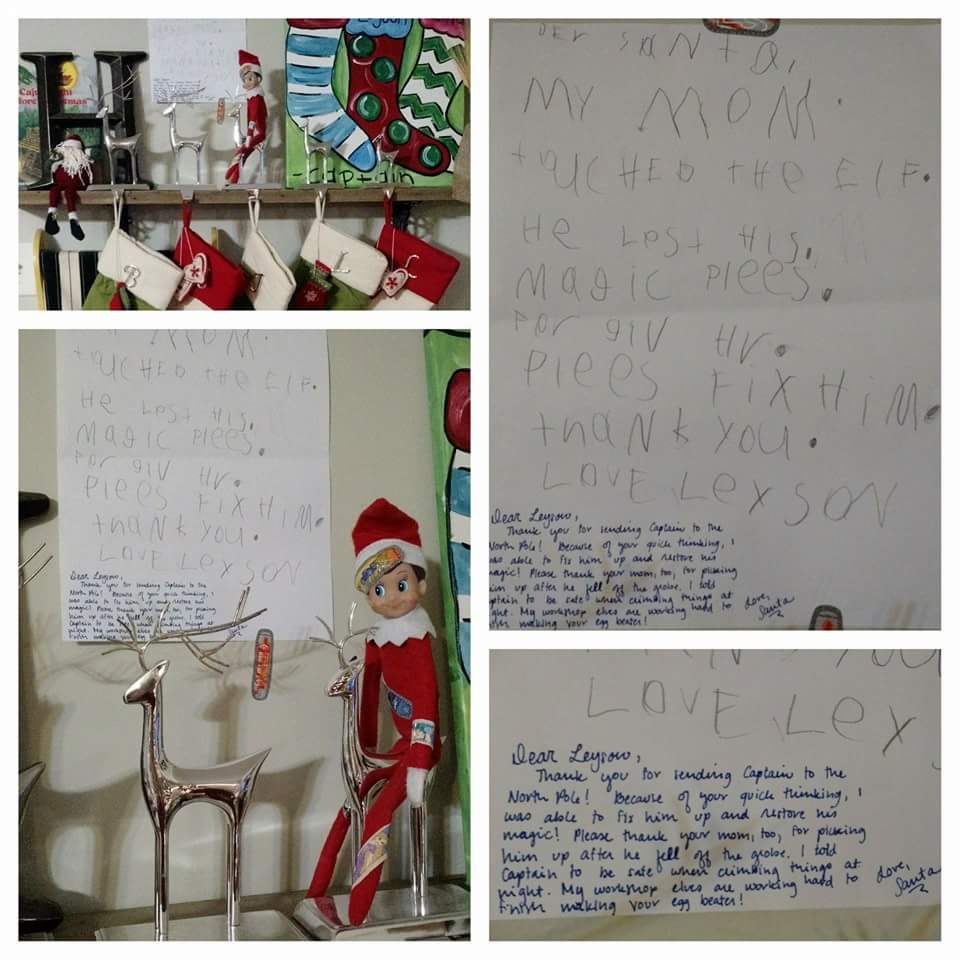 Thank you for sending Captain to the North Pole! Because of your quick thinking, I was able to fix him up and restore his magic! Please thank your mom, too, for picking him up after he fell off the globe. I told Captain to be safe when climbing things at night. My workshop elves are working hard to finish making your eggbeater.

(Don’t ask me why the kid asked for an eggbeater that year, but the following year he asked for a mop wringer. To each his own…)

All was well for the rest of that year. There were some close calls in 2016 with two exhausted parents who bump their bedtime up earlier and earlier every year. And then, there’s this year. Captain the Elf made his debut on December 3 in spectacular fashion, but on the morning of the fourth, he still had not moved from his “It’s good to be back!” spot on our counter. My middle son, always the first awake, ran into the room, his excitement immediately turning to anger yet again. “Moooooom!!! Do you remember how you touched him that one time?!?” Oy. Somebody please give Captain an alarm for Christmas so he can set reminders to move himself. Is it Christmas Eve yet?!? 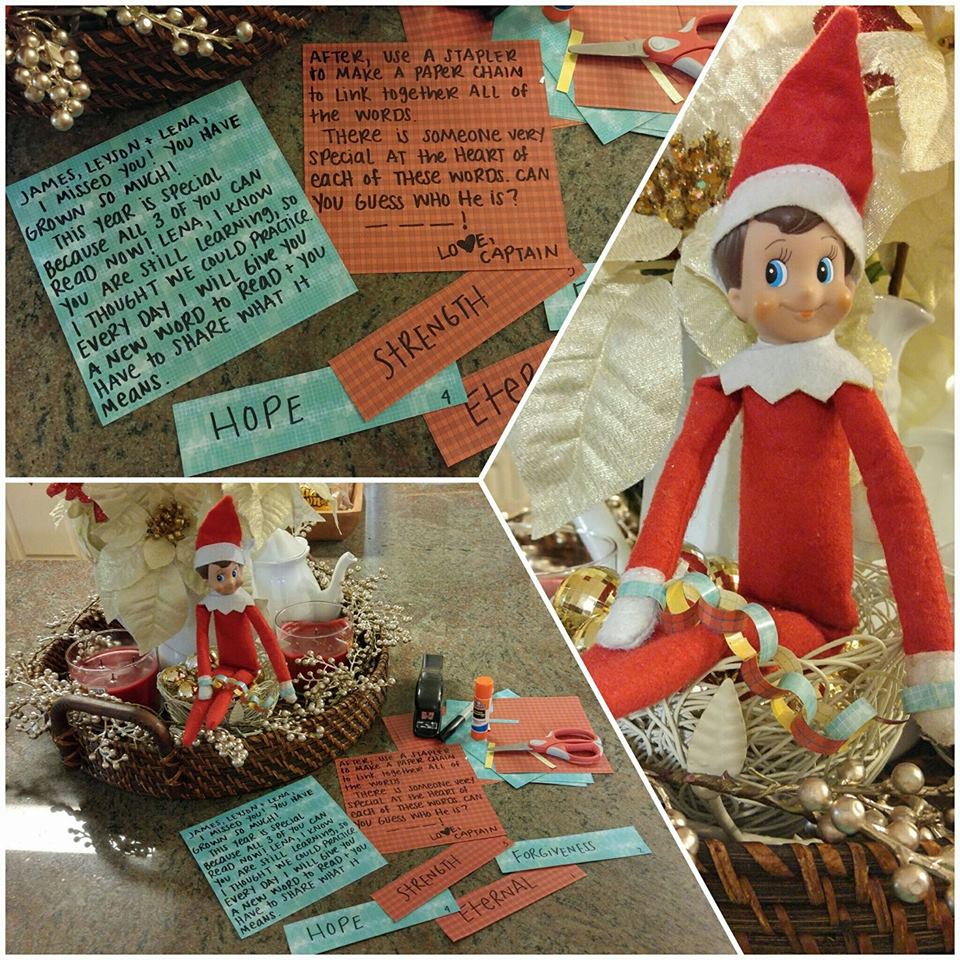 This year, Captain has toned down his grandeur. He has pulled the reins on the reindeer, so to speak. He brings one word a day to the kids and we are adding it to a paper chain to hang on our tree. Captain, thanks for easing things up a bit for Mom and Dad!

Has your elf had any mishaps? We would love for you to share your stories in the comments below!