I pride myself on being a mom who preaches acceptance and authenticity. Trying my hardest to meet each of my children where they are and I do my best to pay attention to the unique aspects of their sweet little souls. But a spontaneous ice cream run on a recent Sunday night, ended up being a bigger lesson for all of us … me most of all.

Let me set the stage for you, my husband was out of town, and so in a burst of energy, I loaded up the kids, and drove the four of us, in our PJs to the nearest (drive through) ice cream shop. Everyone was excited and talking about what they planned on ordering, then my middle dropped a delicious little bomb on us … he was getting ice cream too! That doesn’t sound like much, but for as far back as I can remember in his seven years of life, he’s never been a fan of ice cream. So, at his big announcement, his brother, sister and I made jokes about being surprised and we all giggled the rest of the (five-minute) drive. Fast forward though the drive through, we took a selfie with our ice creams in hand (to show dad, of course) and headed for home. As everyone is excitedly eating and talking, I asked my son about his change of heart. “What made you decide to give ice cream another try, bud?”

His answer stopped me in my tracks.

“I don’t like being different Mom. I still don’t like ice cream, but it seems easier to be like everyone else then to keep explaining that to people.” He continued, “like today (at a birthday party), we could choose Sprite or Coke to drink. I don’t like Coke but everyone else seemed to so I picked that and just didn’t drink any.”

I sincerely hope I never forget that moment, sitting at a red light and realizing my mistakes. Cue a passionate mom-speech about loving his uniqueness and never wanting him to feel the pressure of following the crowd, ESPECIALLY within the safety of his own family. The significance of this conversation wasn’t missed on my other kids either, as they quickly jumped in to agree with me. “It doesn’t matter to me if you like ice cream,” I told him. “I want you to make choices that make your heart happy!” But as I was saying these words, I realized how often my well-intentioned actions said differently. All of the light-hearted celebrating that happened when he said he would order the same flavor as his brother only reinforced what he was wrestling with, and I had no idea. 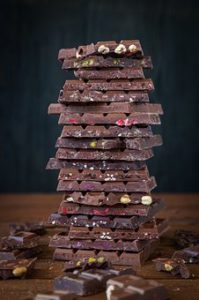 This extends beyond this one kid, too. Our youngest doesn’t like chocolate. How often have I playfully picked on these wonderful little idiosyncrasies, causing them to feel isolated instead of accepted? Yes, he’s sure he doesn’t like chocolate. Yes, he’s certain that he doesn’t want any ice cream. How many times have I pushed them to try again? Or worse, undermined their opinions with my well-meaning suggestions. The one who’s chocolate averse, faces it head on, every day during snack time in his Pre-K class. What I didn’t realize, until very recently, is that he’s been blessed with teachers who support his choices. They wouldn’t have to, but they give him a small bag of crackers when the snack involves chocolate and it means the world to him … and me.

I see now that just because I don’t outwardly pressure their snack choices at home, and keep options in the pantry, doesn’t equate to the unwavering acceptance I strive for. If my words, playfully or otherwise continue to contradict my actions, then I’ll end up with kids who see one thing but believe another. To be clear, I completely recognize them seemingly insignificant aspects of this entire discussion … but at 5 and 7 years old, it’s no small thing in their lives. And yet, isn’t this where it all starts? Isn’t this where we as parents start teaching our kids to embrace their uniqueness and accept the differences they find in others? What starts as a conversation about snack choices will one day turn into much larger issues. I hope I’m more prepared on that day than I was this past Sunday evening. I hope I remember to keep my words and my actions in a line that points right toward the open-hearted acceptance I strive for.