He still needs me to get things for him, put on his shoes, and he doesn’t say much. That chubby baby isn’t potty trained, surely won’t tell me he needs to potty, and doesn’t know his colors. 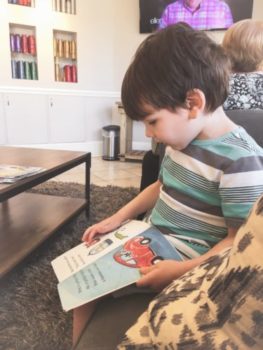 But now, just like I’ve learned with taking away his pacifier, he is so much more capable than I’ve ever given him credit for.

Isn’t this all mothers though? Don’t we all refuse to admit that these babies are so much bigger than we see them.

I’ve had to stop myself several times in the past few weeks from being a hindrance in his growth.

He can put on his shoes … just slower than I do.

He is potty trained … he just needs gentle reminders when he is busy.

This little boy can do so much more than I ever thought he could. His daddy even had him peeing standing up last week. I thought he wasn’t tall enough, that he’d never be able to do it. How does one even teach such a thing? (I’m from a family of girls.) We were going to fall apart when he started school, he could never potty without help.

There might be messes, accidents, and pee on the seat; but I’m slowly learning to step back and let him be.

These little kids are capable of so much more than our mama hearts ever want to admit is possible.