Have you heard? After a year of being closed, the Lafayette Science Museum is back! (Cue music- *Return of the Mack*) Open Saturdays from 10 a.m. to 6 p.m. and Sundays from 1 p.m.-6 p.m., the museum features hands-on exhibits and activities for science enthusiasts of all ages.

As a mom of two miniature dinosaur-lovers, I was elated to hear that the Lafayette Science Museum would soon be reopening. We were there at 10:00 a.m. on the dot when the doors reopened on April 10th. As we walked in, we were greeted by the big bony smile of a gigantic wooly mammoth skeleton. I watched my kids gleefully run from exhibit to exhibit and couldn’t help but smile at how the diverse exhibits and hands-on activities sparked excitement. Hint: SO MANY TEACHABLE MOMENTS! 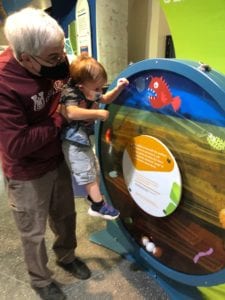 There was something for every type of Science-lover–a weather exhibit in which kids learn about weather patterns and how storms are made, “Crawl Space” with bugs both large and small, a geology area where kids can become “rock-stars”, and an immersive geoscience exhibit that teaches visitors about how energy is derived from the Earth just to name a few. There is also a neat nanotechnology exhibit about the study and application of extremely small things. There were so many hands-on activities to keep both kids and adults interested and engaged. The main attraction, however, was the collection of dinosaur bones. Spread throughout the museum, there were Stegosauruses and Torvosauruses and T-Rexes. Oh my! The exhibit even features a dinosaur selfie station where you could take your picture with a T-Rex! 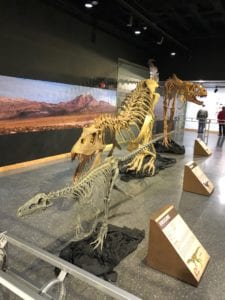 In addition to the exhibits on display, the Science Museum features Planetarium shows about the Moon, the history of Space flight, and the universe. Every Saturday at 11:15 a.m., the planetarium has a show geared especially for kids. In April, the show was Larry the Cat Goes to Space which is about a mischievous cat who sneaks into a lunar spacecraft to follow his human to the moon. In May, it will be Accidental Astronauts in which viewers go on an unexpected journey through space with Sy, Annie, and their dog, Armstrong. Later in the day, there are other planetarium shows geared towards older children and adults such as Cosmic Journey where you learn about the planets and their moons, To Space and Back about the history of space travel and exploration, and Black Holes that answers questions such as, “What are black holes?” and, “Where do they come from?”

After our day at the museum, I asked each of my children about their favorite parts. While my son stated, “Dinosaurs!” without hesitation, my daughter yelled, “The planetarium show, Larry the Cat!” I stopped to reflect on what my favorite part was and realized that it was seeing the excitement and pride on the face of the museum director, Kevin Krantz, who was so happy to see people enjoying the museum again. 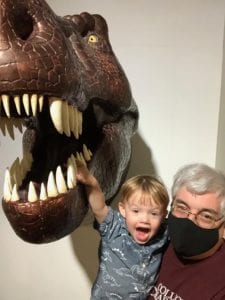