I decided the last day of Festival International was officially dubbed the day the stars aligned for “Family Fun Day Sunday”. After Mass, and a full afternoon of festival fun, we decided to head on over to Rock N’ Bowl to enjoy some Zydeco music after an early dinner at the Sainte Marie Restaurant. As parents of a 6 year old and a 3 year old, I knew this could have gone one of two ways:

-Someone will have a complete meltdown after the long day and we will all be miserable because of it, listen to a few songs then have to leave.

-Everyone will have the time of their lives!

To say I was grateful that the experience turned out as the latter would be a vast understatement! The band, all their instruments, the huge disco ball and colored lights, captivated our girls. They clapped their hands and stomped their feet (mostly) along to the beat. Our youngest wanted to be right up close and personal at the front of the stage, and probably would have hopped up if I had let her! My husband taught our oldest some basic waltz counts (1,2,3….1,2,3) and she was catching on. We waltzed, two stepped, and jitterbugged for two solid hours.

I, almost immediately, noticed everyone’s reaction to the girls, as they were by far the youngest people in the establishment. Faint whispers could be heard as we sashayed among the crowd.

This set off insecurities and flashbacks to when I was “kicked out” of dancing school in 2nd grade for “having too much fun.” (That’s me, class clown here! What can I say? I like to have fun while learning a new skill, and have been that way even from a young age!)

I began to feel myself second-guessing if this was the best decision on how to end “Family Fun Day Sunday.” Were they talking about us? This is a family friendly establishment and it IS only 5:00. Was this the right thing to do?

But as I took a closer look around …

NO ONE lacked a smile on their face! Everyone was waving to the girls, clapping along with them, and even complimenting their dancing attempts.

Just as we were taking a small break, off in a corner of the dance floor, a lady who had been observing us from afar, walked up to us and started a conversation by saying three words that I think I really needed to hear. With tears in her eyes she proudly said,

Isn’t that the truth though? Why would we ever stop dancing through life? Literally and figuratively.

But figuratively, I have stopped “dancing” a lot lately. Lost that zest for living my life so carefree. Lost the light feeling you get as your skirt twirls around you while you are being spun out on the dance floor. And why?

Name 3 good reasons why I shouldn’t “dance?” You can’t? Neither can I. 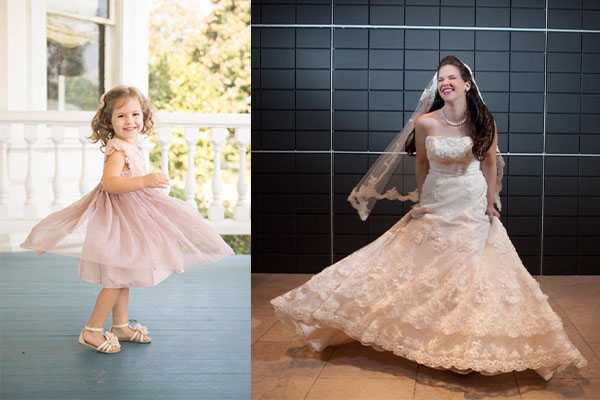 Everyday presents at least one opportunity to “dance,” either literally or figuratively. It was a great reminder to cherish the moments when they are young and dance like no one is watching. Never stop dancing, Mommas!

(Photo credit to Catherine Guidry Photography. She has captured my family dancing on more than one occasion and I am forever grateful.)