Growing up in South Louisiana, I had a fairly atypical upbringing. We didn’t move through our year in Sportsman Seasons: teal, squirrel, duck, deer, hog, turkey, alligator, etc. We did do a whole lotta fishing, though, so I think that counts for something.

Our son came forth from my womb stereotypically male.

Instead of the sweet baby coos and ahs his sisters uttered in their first hours on earth, my son grunted and groaned. Instead of turning his head to locate the sound of his mother’s sweet lullaby, that boy was immediately distracted by the drum of a truck motor. He is messy and moves big like a bull in a china shop. He is strong and loud. 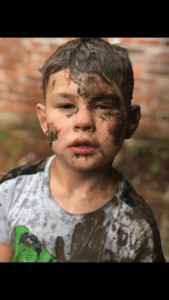 You know that little saying “A boy is noise with dirt on it” well it was VERY true in my home.

The dude loves outside. All of it. The dirt and the grass and climbing trees and throwing rocks and using a stick as a sword and worms and bugs and lizards and birds and squirrels. He is an outdoorsman through and through and in a way totally different from my girls. He is curious about all of it and could spend all his time exploring.

He joined cub scouts a year ago, and it gave him another outlet for exploring this side of himself. He loves scouting, and in watching he and my husband interact on their scouting adventures, I can see that my husband is loving it too. This is what he was excited about when we found out our son was going to be a little blue bundle instead of pink.

For his 7th birthday, we decided our son was ready to own a bb gun.

You would have thought we gifted him the moon. He has been very responsible when allowed to use his gun and follows the rules and protocols set forth by my husband very well. He understands the privilege of gun ownership. And after a summer of backyard target practice, my hubby decided our son was ready for his first hunt. 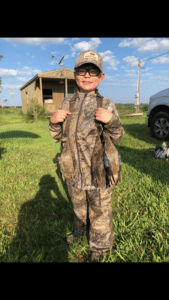 They left in the early morning hours to head out to Kaplan for a teal hunt. My husband said it was one of the greatest parenting moments of his life, and I am sure it’s up there on our son’s highlight reel as well. He tripped and fell into the crawfish ponds so many times they lost count, but each time he popped back up with an even larger smile on his face. He got to shoot the gun, and they even brought home some birds for supper. 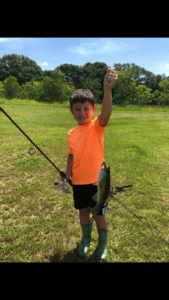 Seeing my little Louisiana Boy loving living in a Sportsman’s Paradise makes my heart swell, and reminds me of what a truly wonderful place our state can be.

It also reminds me to look up some squirrel recipes… is that on Pinterest?