As I sit here and reflect on Hurricane Laura, I thought I would try and put my thoughts down about how I felt almost 15 years ago when Hurricane Katrina made landfall.

One Week of Classes

In August 2005, I lived in Metairie and attended Xavier University of Louisiana. I attended one week of classes that semester before Hurricane Katrina made landfall. Friday, August 26, 2005, I attended classes on campus like I normally would have. Little did I know that I would not make it back to classes or on campus for the remainder of 2005. One week was all I had. I made it to my apartment that evening (cell phones weren’t as popular in 2005 like they are today) and put the TV on to watch the local news. My parents had given me their old floor model TV (all their old furniture really) and I remember the picture tube in the TV wasn’t working that evening. I can recall Governor Kathleen Blanco blaring through the TV to all residents to “get out” of the area. I did have a radio and heard the same information blaring through the radio. I remember hearing “leave” and thinking, “That’s strange.  We don’t ever leave for a hurricane.” I can’t tell you the number of times or number of hurricanes that we “rode out” in New Orleans and Lafayette for that matter. My parents didn’t leave. We didn’t go anywhere when a storm was on the way. Honestly, my parents and I still really don’t leave.

I called my mom, texted or called a few friends and settled in for the evening. Mom called me later that evening and said “Christina, I think you should come home.” I remember telling her something like – Mom, why? I will just have to turn back around and come back on Sunday to make sure I am back on campus for school Monday  I was pretty determined not to come home  After another phone call even later in the evening –  she said “Chris, come home.” I begrudgingly drove to Lafayette with one week’s worth of dirty clothes and that was it. I think at the time I thought, well, I’ll have a week’s worth of clothes – that should do it  Wrong. Boy, was I ever wrong… I had no important documents. No files. Nothing else. I remember not having anything else with me except the clothes on my back and my dirty clothes from the week.

A television with a working picture tube and both local and national news stations made a few things clear when I arrived in Lafayette in the middle of the night on Friday night/Saturday morning. The hurricane’s path and strength had changed and the storm was rapidly intensifying. I drove home around midnight or 1 am or so – it was very late into the night. There were no other cars on the road when I left NOLA. Such a stark difference between that and the contraflow that happened less than 12 hours later. Thankful for my mama, I realized that I made it out in time and that I would be safe from the storm. Meanwhile, I had friends who stayed in New Orleans, friends from states far away, and friends who stayed on campus in the dorms. Honestly, it was pretty expensive to get a quick flight out of town. I don’t remember if anyone I knew left via airplane.  Several friends drove home and a large group of classmates and friends drove to Baton Rouge. I did have friends who stayed on campus during Hurricane Katrina as well.

When Hurricane Katrina made landfall, I watched it on TV with my entire family. The horror of watching it and seeing the aftermath will forever be etched into my mind. The sheer devastation was unfolding before my eyes. Never had I seen people walking on the I-10 bridge before. I saw babies being held by their parents and families. I saw people pleading and begging on TV for help. I saw older people being rescued from rooftops. I saw water engulfing homes. I saw sweat, tears, and people in sheer desperation. Never in my life had I seen anything like this, let alone in the place I called home.

I remember staring, sobbing, and watching in desperation. Help them, I thought.  Someone / anyone help them. To be less than 2 hours away and have food, running water, and safe shelter, I was stunned. My friends and classmates were all okay from what I remember at that point. Several days after the storm, I remember checking on a friend who stayed back in the dorms. She told met that they were are okay, but the water was rising fast. They kept having to move up from one floor to the next in the dorms. She mentioned that their cell phones weren’t getting good connection and that they were going to lose the little battery they had on them very soon. She asked if I could call 911 and tell the dispatcher where they were. They needed help desperately. I was shocked. After frantically calling 911, the dispatcher said “We know, we are trying.” I believe everyone in the dorm survived. The water continued to rise and so did the death toll. I remember the running tally of deaths on TV continue to increase all throughout the days and nights that passed. So gut wrenching now to remember that. So incredibly sad. 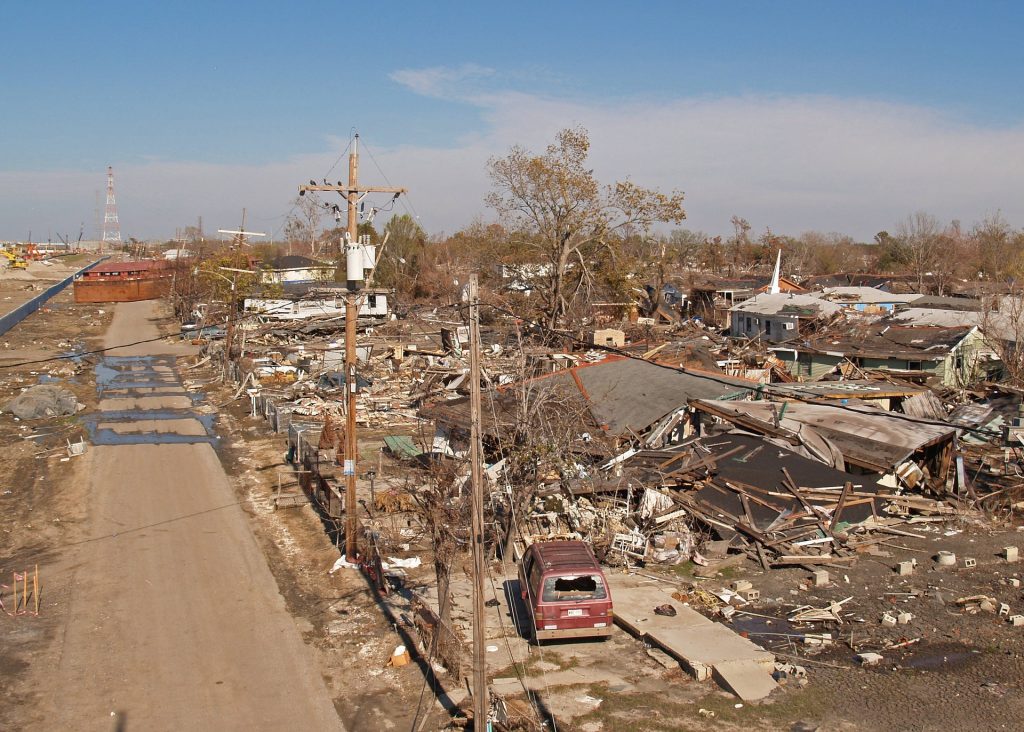 Seeing it With My Own Eyes

I didn’t know the exact magnitude of the effects from Katrina until I actually saw things first hand. I believe I was able to return to NOLA after a month or so to clean out my apartment and collect several things that I may have wanted and needed. I lived on the first floor of my apartment. Dad and I went in to assess the damage. Surprisingly, my apartment looked like nothing happened. Well, the water had rushed in and stayed for a bit after further inspection. The cloth couch had a water line where the water sat for a while.  Likely it took a while for the water to recede. The freezer packed with meat and food was still there and all items were still in it, but everything was liquified. The meat and bones – EVERYTHING. The floor model TV was ruined. But the smell. The smell was something I will never forget. I cannot even fully describe it. I can try – when you inhaled any air, it felt as if the inside of your nostrils were burning. I remember it smelling awful – it smelled rancid, spoiled, dirty, and like death. It was so, so bad. I am not sure what it was, but the air quality was TERRIBLE. It was a ghost town. You couldn’t get anything to eat anywhere and the running water coming out of the faucet was so dark and smelled so badly that we didn’t even want to wash our hands. We cleaned what we could and left.

I was a college student and honestly, I didn’t have near as much as people who lived in NOLA their entire lives. I didn’t have family heirlooms or anything really. When people explain that they couldn’t find their family, I know why. There was no way to find people.  No way. No way to know if their family or houses survived. No way to see their elderly family members. No way to get in touch with them. No phone lines worked. Many were left without electricity for a very long time. DEVASTATION was everywhere. The devastation and number of deaths still brings me to my knees. I am broken when I remember this. I am crying writing this today – August 28, 2020. Fifteen years later.

After that horrible semester of Katrina, school began again in January 2006. I stayed home in Lafayette that entire semester. There were a couple of different options during the aftermath on next steps and how to proceed with school. We could transfer to another University or we could choose to stay at Xavier. Transferring for me would have meant moving to another state and/or not being on track to graduate on time. I stayed at Xavier. On the first day of classes back after Katrina, one of my professors began the class with “We will pick up where we left off.” One classmate of mine raised her hand and said (I hope I remember this correctly) “Sir, some of us have lost everything. We have nothing. Can you start from the top and start over?” I’ll never forget that moment. Ever. Some of us had life as normal. Some of my classmates had nothing. 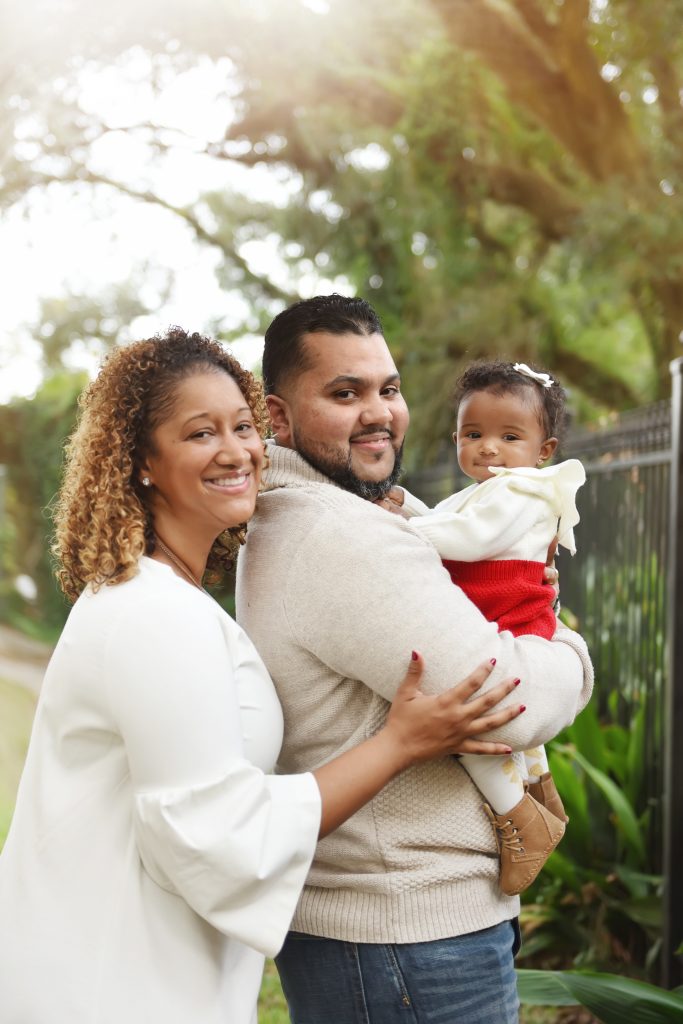