I stared at a wall of faces. So hard to choose. All of them were in need of an education. You’ve heard the spiel before: “For just $32 per month….” My son reached up and chose one profile – and then another one. He was confused because this boy had the same face as the first. His profile listed the same birthday, but a different name. Brothers. Twins. “Mom, we can’t choose one without the other.” So we took both of their profiles home with us.

I hopped in the car, profiles in hand, and my husband said, “I hope we get to meet them one day.” One day…

The Pierre twins became more than just a monthly check as our hearts longed to see them thrive. Not only had our family continued our monthly donation to cover their tuition, emergency medical care, school supplies, books, and annual de-worming and prevention, but the five of us were actively praying for them. We talked about them, wondered if they had a good day or bad day. The kids would make comments such as, “Oh, I bet the boys would like this!” “Do you think they have seen one of these before?” They called them their “friends” as if they already knew them.

The day came for my husband and I to meet the boys nearly one year later after we began sponsoring them. It just so happened to be our 10th anniversary, and my husband and I had always planned on going some place tropical to celebrate. Haiti is indeed tropical! We joined the Haiti mission team at our church, selfishly, to meet our sponsor kids. 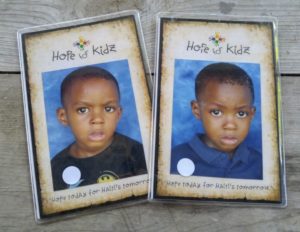 The minute I stepped off the plane in Port au Prince and heard the brass band greet us, my heart leapt with an inexplicable joy. Now, driving through Port-au-Prince, I saw so much destruction – a nation still recovering from centuries of economic struggle, legal discrepancies, generations of corrupt leadership, and devastating natural disasters. As we drove hours outside of the capitol city, I saw not only pockets of poverty, but an entire country of poverty. Haiti is the poorest nation in the Western Hemisphere; what we consider poverty here in the States looks wealthy by comparison. But that does not – and should not – define Haiti. 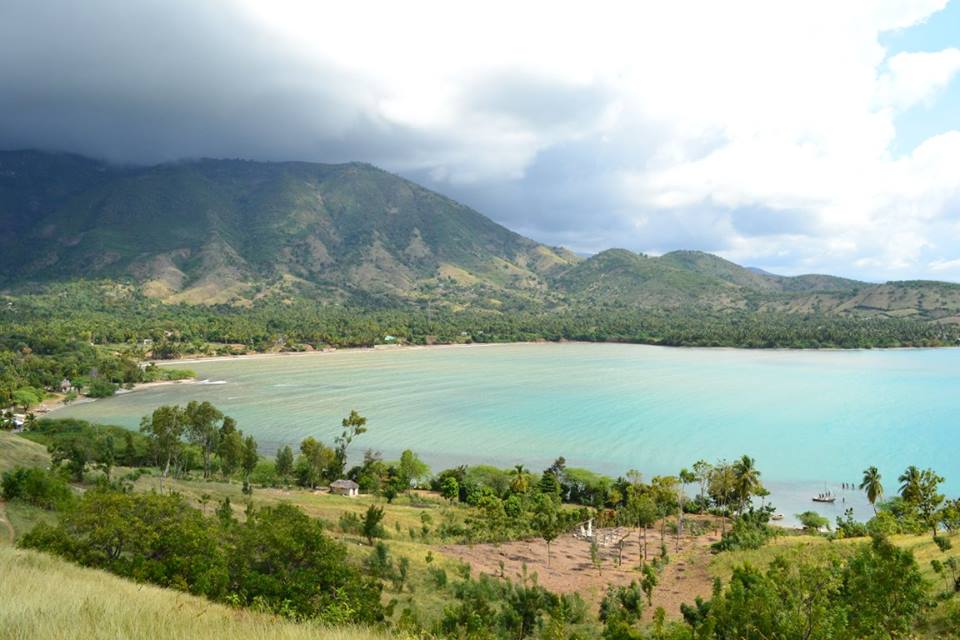 No, if you open your eyes to the beauty that lies within its borders, you will see that the people define Haiti. The language and the landscape define Haiti. Music, food and sharing life together is all part of the beautiful culture there. I found myself envious of their strength, perseverance, ingenuity, and unwavering faith. I saw babies being passed from the mother to the neighbor to a fellow church member – a true village working together to raise the next generation. You will see most homes empty during the day as women are selling goods together or walking to the river together to wash laundry or cooking together outside. You rarely see anyone standing alone – they are always in community with each other.

We learned that Cajuns and Haitians aren’t that different from each other with our hospitable natures, amazing food, music, dancing and our desires to live life together in community – but in many ways, they do it even better. Even Haitian Creole and Cajun French are similar – so similar that if you know even just a little Cajun French you can communicate effectively. Of course, if you speak French, well, you have a huge advantage to building relationships with the people of Haiti who learn French from a young age.

I stood in a sea of kids in pink and green uniforms all grabbing for my hand, calling me “blan” or “white” before telling them my name was Casey (“kaySEE” they would say in voices that seemed to go down an octave when saying my name). I didn’t see the two familiar faces I was looking for. The principal saw me searching and gestured to me. I told him the names of “our” children, not really ours because they come from a loving home with both parents still living. Their dad is a teacher and their mom sells rice and flour. We call them “ours” because they, specifically, are always on our hearts and minds. 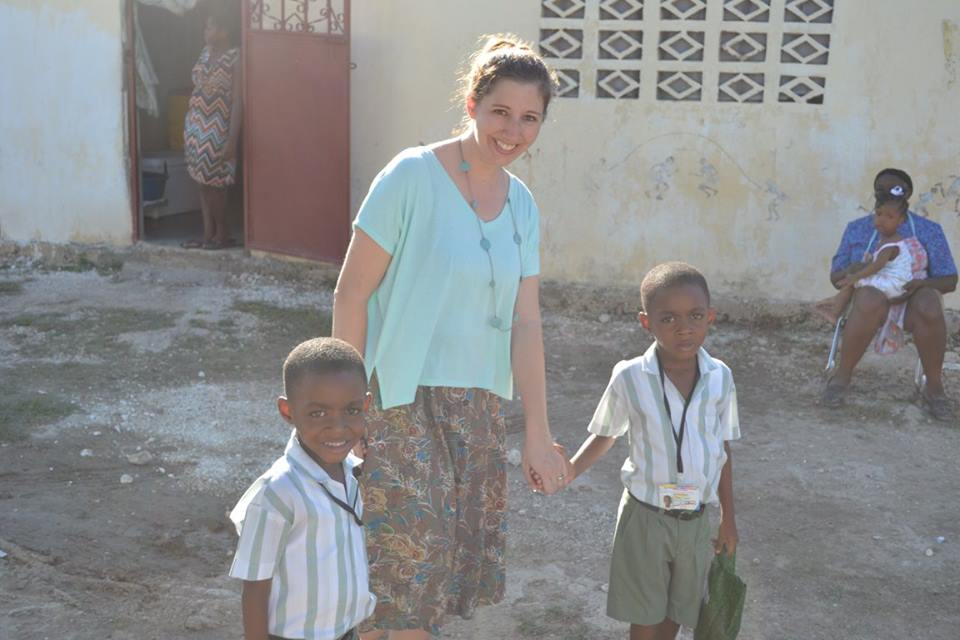 A minute later, the school leader was walking straight toward me, hand in hand with two little boys who were running just to keep up with his pace. I struggled to keep my composure and knew how silly I must have looked with my huge grin and tears streaming down my face. But their hands extended toward mine as the principal told them, in Haitian Creole, that I was very happy to meet them. They were real. They were no longer just pictures on our fridge. They were in school, thriving, and receiving a good education.

“‘For ‘I know the plans I have for you,’ declares the Lord, ‘plans to prosper you and not to harm you, plans to give you hope and a future.’” Jeremiah 29:11

Our love grew for not just the Pierres, but now to a whole culture, community, and country. Within a few days, my husband and I had fallen in love with Haiti. We found a passion that we shared together on the mission field. Our home is adorned with pictures and memorabilia from our trips. A mason jar sits on our counter to save up money to help the twins and now our third sponsor child, a 7 year old girl, who is their cousin.

We are just returning from our third trip to Petit-Trou, and this time our oldest son asked to join us. His eyes were opened to something beautiful. His innocent nature didn’t see the poverty, but saw simplicity and efficiency. And he fell in love with Haiti just as we have. 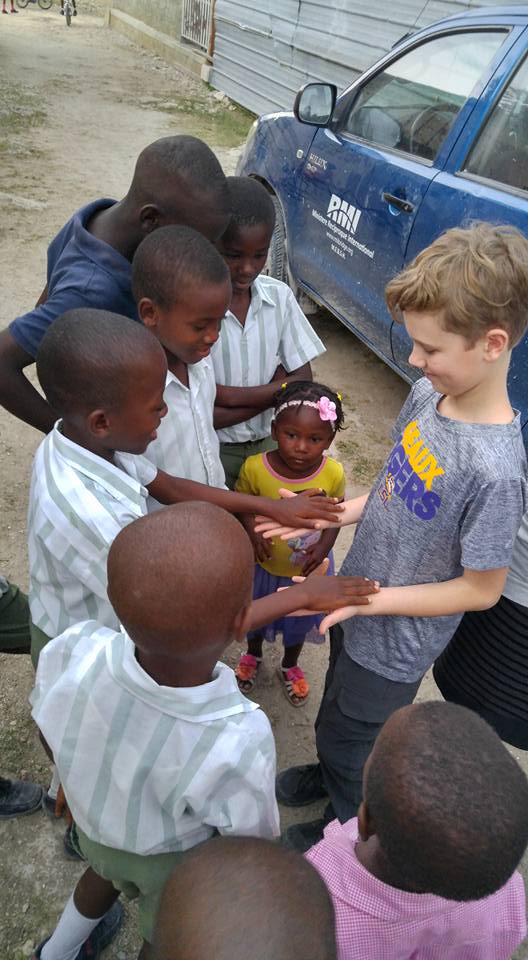 On our last night in Petit-Trou, a boy came to sit down next to our son and put his arm around him. They sat that way for forever, laughing and looking at pictures together, taking the occasional selfie, and repeating words to each other in English and Haitian Creole.

“I’m going to remember that moment forever. Language isn’t a barrier. To me, there is no barrier.” –James, age 10

I encourage you to take your family on an adventure to become more mission-minded. Our kids are watching us. If we, as parents, include them in conversations about helping others, they, too, will rise up to do the same. They will want to be a part of something bigger than themselves. For our family, it started with a wall of faces, and instead of passing them up, we chose one – well, two – and that’s where our story began…

Our family attends The Bayou Church in Lafayette who has partnered with Reciprocal Ministries International. RMI links churches in the United States with churches in southern Haiti, creating sister-church partnerships. It is also the parent organization of Hope for Kidz which provides sponsorship opportunities for kids in Haiti to receive an education. Our mission is to bridge our two cultures together. We serve each other in different ways through encouragement and building Christ-centered relationships. Our church helps financially when we can and their church prays for us weekly and hosts our team annually.