I am a total mom when it comes to dogs that don’t have families. Once we rescued our first dog, I was a goner. He was always so grateful and happy to be with us; with every interaction, you could tell he was just happy that his people had found him.

When we rescued our second, we experienced those feelings all over again. Every time she stretched out in our laps and sighed contentedly, we fell deeper in love. She had found her people and we had found our girl. 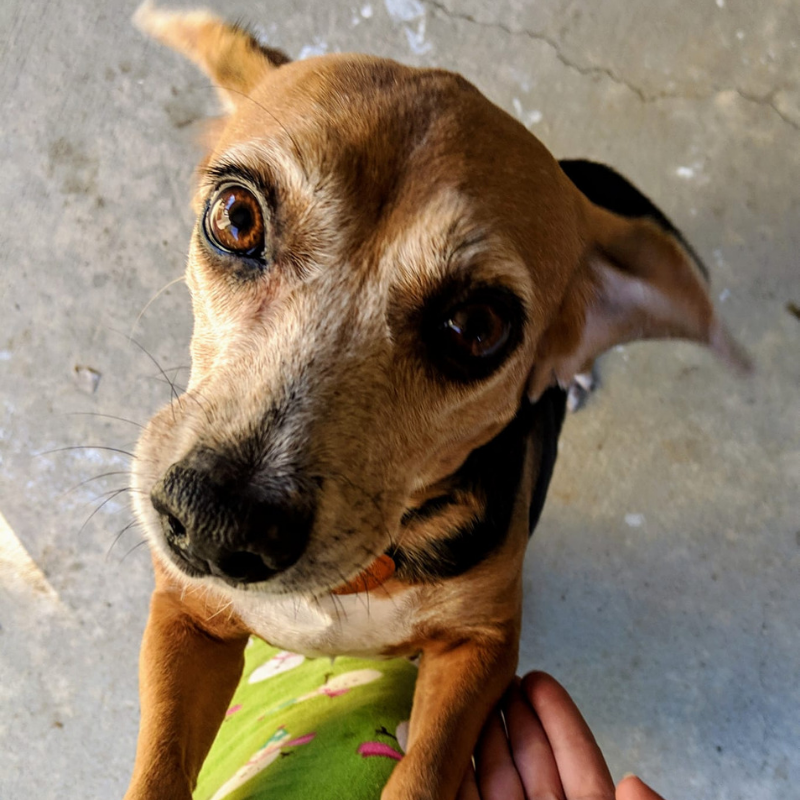 With two rescues in the house, I was always coming across Facebook posts of dogs with the saddest stories, some who just needed to be given a chance. One in particular was named Sounder–a Plott Hound / German Shepherd mix who was rescued as a puppy from Hurricane Harvey. He was housed at a pound in Jennings where he was tagged for rescue. Then he lived the next two years boarding in a vet clinic, spending his days in a tiny kennel. He eventually made it to the rescue where my second dog came from and I learned his story. He never had a family – no one ever inquired about him because he was such an unknown. He had never lived in a house so it was hard to tell potential adopters how he would do in one.

At the time, we had a very full house – two dogs, two cats, two kids – our fostering him was out of the question. We also weren’t sure how the kids would feel about a dog we couldn’t keep – they loved our animals and we worried how they would feel if we just had one temporarily. But I could never get Sounder out of my mind and I told nearly everyone I knew about him – trying to find him his family.

And one day, fate intervened.

My first rescue pup, Andy, passed away unexpectedly. The grief was raw and desolate. But through the grief, we saw an opportunity. After a few days of processing, we started to talk about fostering dogs. We knew we weren’t ready to adopt; no one could replace Andy and we weren’t ready for an alternative, but we also felt the need to channel our feelings into something positive.

We sat down as a family and talked to the kids about fostering a dog who needed a home. At first, they didn’t understand–the dog will live in our house but it won’t be ours? We explained that there are some dogs who need to be given a warm home to stay in while they wait for their family to find them. And that we could help save a dog by opening our home to them and help them find their people.

We all took a vote as a family – we were in.

The next day, I called the rescue and immediately asked about Sounder. He had been on my heart even before Andy left us and I knew I wanted to give him a chance. He came to the house on a Friday evening. Having never lived with people before, he was very skittish and shy. He ran immediately into the kennel we had for him and wouldn’t come out. We told the kids that Sounder wasn’t used to being in a home and we had to make sure he knew it was a safe place. They kept their distance and over the course of a few days, we all felt the excitement as Sounder would wander further and further into the house.

It wasn’t always easy though. Sounder was very frightened around men and would run into his kennel any time my husband entered the room. This proved rather difficult as my husband is the one who lets the dogs out at lunch during the day.

Many people would tell me, “I could never do that; I would get attached.”

But these dogs were never ours. And we made sure that the kids understood that. Before they came into our home, we would make it very clear that the dogs didn’t belong to us and it was our responsibility to get them ready to meet their forever family. If it ever seemed like the kids were getting too attached, we would quickly remind them of our role in these dogs’ lives.

The entire family took to the job of finding Sounder a home, and I’m happy to say that within a week, one of our close friends chose to adopt him. The kids were very prepared – we explained exactly what would happen and how Sounder was going to live with his family. They were excited to welcome another foster dog and repeat the process again.

A week later, we welcomed Shelby – a senior beagle who was just getting over some rough health issues after being found as a heartworm positive stray.

But this one was different.

The kids started calling Shelby “Grandma” – and she had a heart of gold. Nothing could get this girl down – and while we tried with earnest to find her family, it became pretty apparent why we couldn’t – this girl was ours.

In many ways, fostering dogs helped heal us after the grief of losing our pet. But it also helped to teach our kids the importance and value of offering our home and love to those who may need it. I had a lot of fear before starting the process – especially in the midst of grief. It was important that we were all on the same a page and that the kids understood exactly what was happening. If I ever sensed they were getting too attached, I would quickly remind them that we were just the dogs’ “in-between home” and while Grandma turned out to be a “Foster Failure” – I know that they would have been ready if things had gone another way.

While our home is full yet again, I would not hesitate to foster again and I would encourage those who are interested in having a honest conversation with their kids and family.