When we started having “Yes Day!” instead of birthday parties a few years ago, the children stuck to the list we’d created for them. There was a whole year or two of Trampoline Parks, Go Kart Racing, Buffalo Wild Wings, and Olive Garden and we loved it. We loved the freedom of giving the kids the power to choose, and they loved that too. 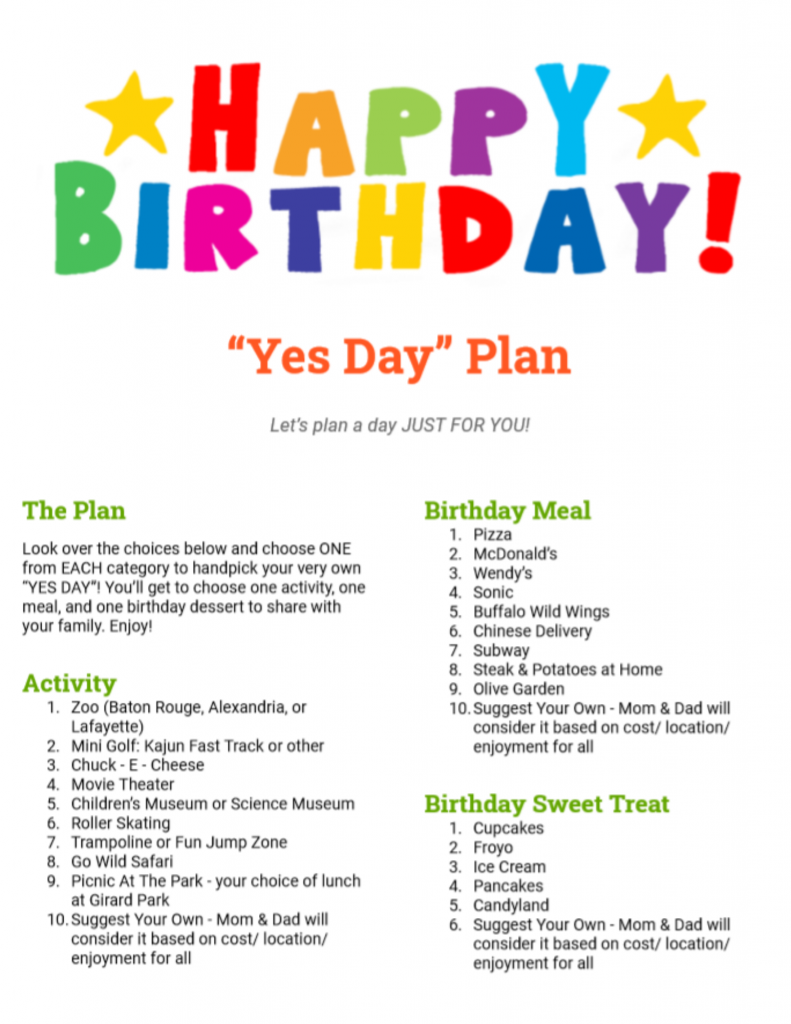 The next year of Yes Days! ushered in a new activity: The Shopping Spree. We had always given our kids the option to have $150 cash instead of a Yes Day to use buying whatever gifts they wanted. I insisted on this rule because I knew at least one of our children had the love language of receiving gifts and I wanted to honor that too. Plus, less work, so: YAY!

If memory serves me, the Shopping Spree got started when one of the kids asked if they could use only SOME of their money and give some to their siblings so they would enjoy the time spent shopping. I admired the empathy for another person’s experience and we were at the Louisiana Boardwalk in Bossier City which has something for everyone; it became a whole day affair. We gave the birthday child $100 and each other child $10. I was wary that it wouldn’t work, but to my surprise, it was such a hit that nearly every child that year picked a shopping spree at various stores (including the mother lode hauls at 5 below).

Except for the kid who didn’t. 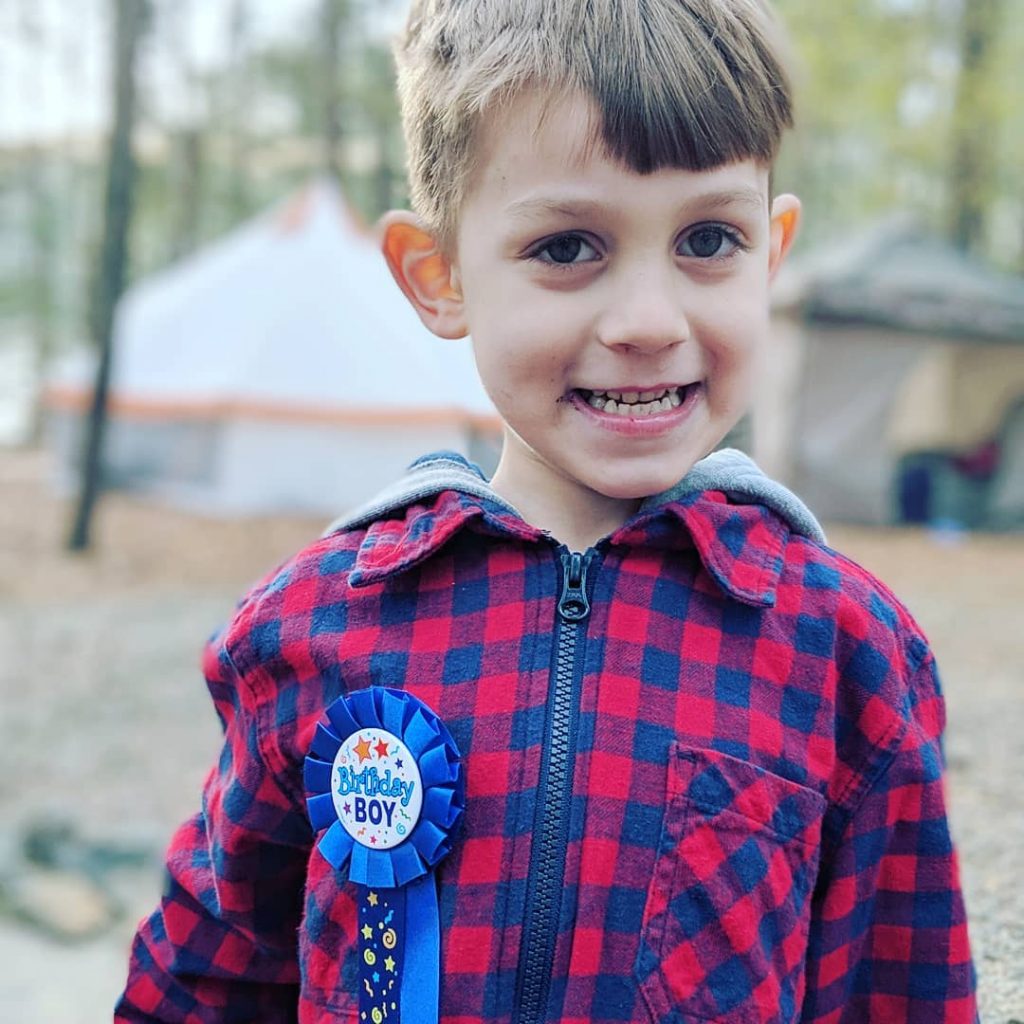 I think having our oldest child open the door to choosing “Suggest Your Own” and starting the year of Shopping Sprees sparked some real creativity. Our youngest son, Sebastian, asked in 2019 if his Yes Day could be a camping trip & his “sweet treat” could be smores. So that’s exactly what we did and it was tons of fun! Later in 2019, our middle child was gifted a limo ride experience by Lafayette Limo & Trolley after he missed out on the one he earned with his school fundraiser due to illness. He still chose a shopping spree ala birthdays 2018 but he rode there IN A LIMO – and the other kids took notice: Yes Day can be a BIG out of the box experience! 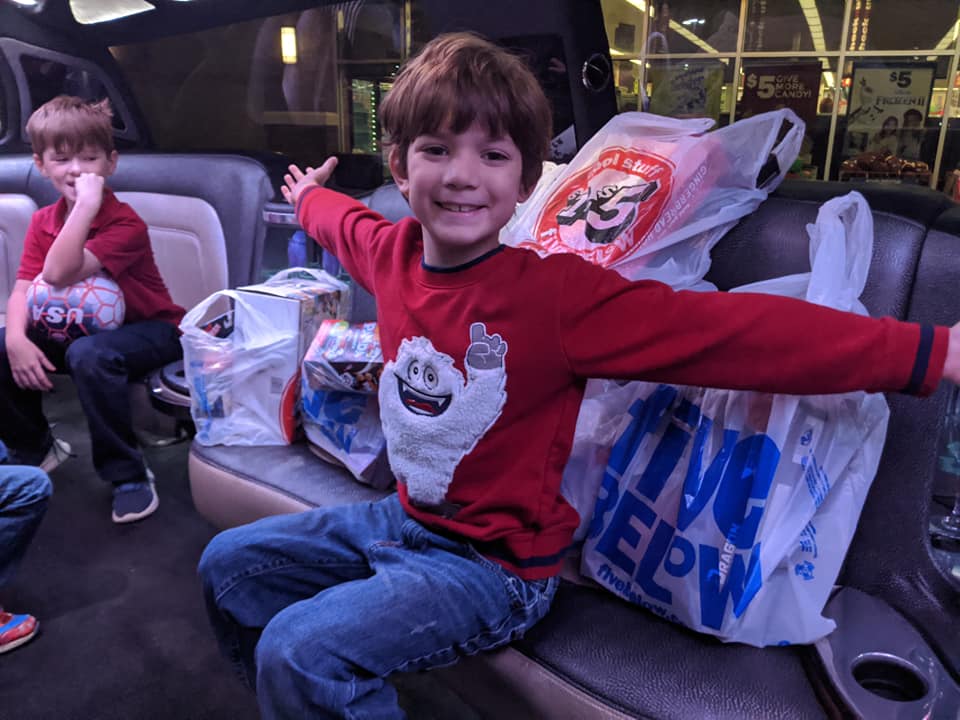 After Dom’s limo adventure Dec 2019, our caboose, Ivy, started talking about wanting to “sleep at a hotel and eat popcorn and watch a movie” for her next birthday (at this point it’s still 11 months away, the girl is a planner). Sebastian, my little camper, took notice and decided to see if he could push it one step further.

These little kids seem to be the most unafraid to ask for what they really want among our seven children and I’m here for it.

On a ride home from the bus stop last week, Sebastian and Ivy were talking about their Yes Days and I mentioned to Sebastian that his birthday is only a month and a half away and he could start thinking about what he wanted to do – because like Ivy, I enjoy planning things way in advance. Without missing a beat, he says to me, “I want to stay in a tall hotel, in a high up room that has a beautiful view.” At this point I’m thinking, “beautiful view, kid you’re going to be 6, not 26,” but I digress. He goes on to say, “I want to eat at a hotel’s fancy, clean restaurant for my dinner and dessert. It has to have a playground too.” Well, kid, that’s a tall order but let me see what I can make happen…

I got with my husband and we started the search. Let’s be honest, I was a little worried that just being at a hotel was not going to be super fun for kids, and I only knew of one hotel with a playground and it was in Lafayette. We had been talking about a trip to the new Louisiana Children’s Museum to use our membership passes recently (aka no added expense), so we started our search in NOLA, thinking we could make up for the lack of playgrounds on-site with a trip there. I reached out to my NOLA Mom writer friends and they suggested The Higgins Hotel which not only met Bash’s criteria but also has rooftop dining to take his ‘top of the world’ birthday to the next level.

Bing Bang Boom it was booked!

And voila – that’s what the Yes Day experience has evolved to so far. I’m excited to see how this birthday experience will trickle down into each of the next birthdays. Do you offer experience over gifts for birthdays? What unconventional traditions do you have?

*As an additional note – this year, our oldest who lives with us only part-time, can’t be here for his birthday so he’s opted for taking the money in the form of, “lots of strange jumpsuits. You know, mom, like ramen noodles and Nutella and anime.” I can’t claim to have kids who lack imagination. That’s for sure.