Y’all, this Elf (as in, on the Shelf) … the cute little felt guy, with the twinkle in his eye, that brings joy to children around the world. It’s all fun and games and warm fuzzy feelings at first, but 9 years into this gig has me rolling my eyes and thinking “What in the world did I start?!”

Nine years ago, when my first child was 5, my second was 1 1/2, and my third was 5 months old, I walked into a bookstore and saw that glossy white box with that adorable little red elf in it. I stood there reading the story, and as it drew me in, I thought “Awww, what a cute idea! This will be so fun (insert eye roll at my former self)!”

And that was the day the little magical (damn) elf came home with me. I didn’t really think the next 12+ years through. I was living in the moment and just saw the twinkle that he would bring to my children’s eyes. He quickly became intertwined in our Christmas traditions. It was then decided that the day we arrive home with our Christmas tree, it would summon the Christmas spirit and that’s when Elfie would magically appear …

… and so it began. Easy enough. 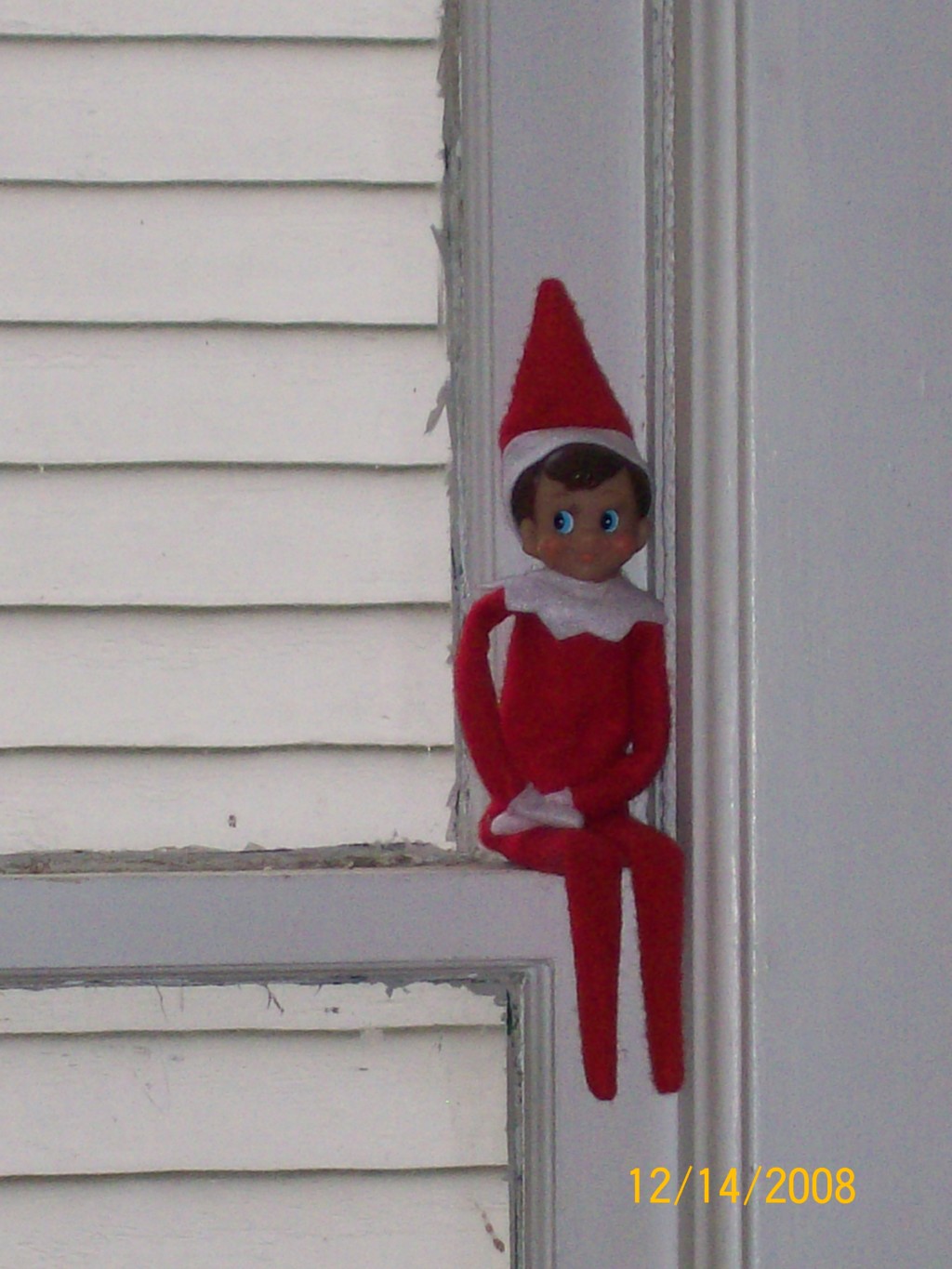 Dad would load up the kids in the car to go get the tree, and I would act like I forgot something and run back in and put the elf in position, ready to delight the children upon our arrival home (clapping noise)! Oh, what fun!

As a side note, 8 years later, I find us loading up 4 kids, driving away and hearing the exciting chatter in the backseat about where the elf will be this year when we arrive back home. Oh, snap!! We forgot about the elf! I frantically text the neighbors to tell them where we have a hidden key and where to go search in my closet for where he MIGHT be stored from last year. We ask them to strategically place the elf in the upstairs window to greet a bunch of excited faces when we drive up in the driveway. High five to awesome neighbors, who didn’t even own an elf themselves at the time and must have thought we were crazy!

Anywho, nightly moving of the elf goes smoothly (remember, I’m fresh on the case), as Elfie hangs from the chandelier and sits in the refrigerator hugging the ketchup, then goes back to the chandelier again, in a different position. You see, back then it was simpler. There were no Elf on the Shelf kits or wardrobe changes. We were light years away from thinking about marshmallow bubble baths and Pinterest wasn’t even a thing.

It was just simple fun of hopping around the house sitting on things.

Then one day, the elf fell off its perch and baby sister picked it up in a hurry, and the 5 year old saw and SCREAMED and CRIED! “You killed him! Poor Elfie! You made his magic disappear!”

Oh, the drama and the convincing that surely he’ll be ok, as you secretly delight that maybe for a couple of nights, you won’t have to get out of bed to move him. This is actually awesome. He can be out of commission for a few days! 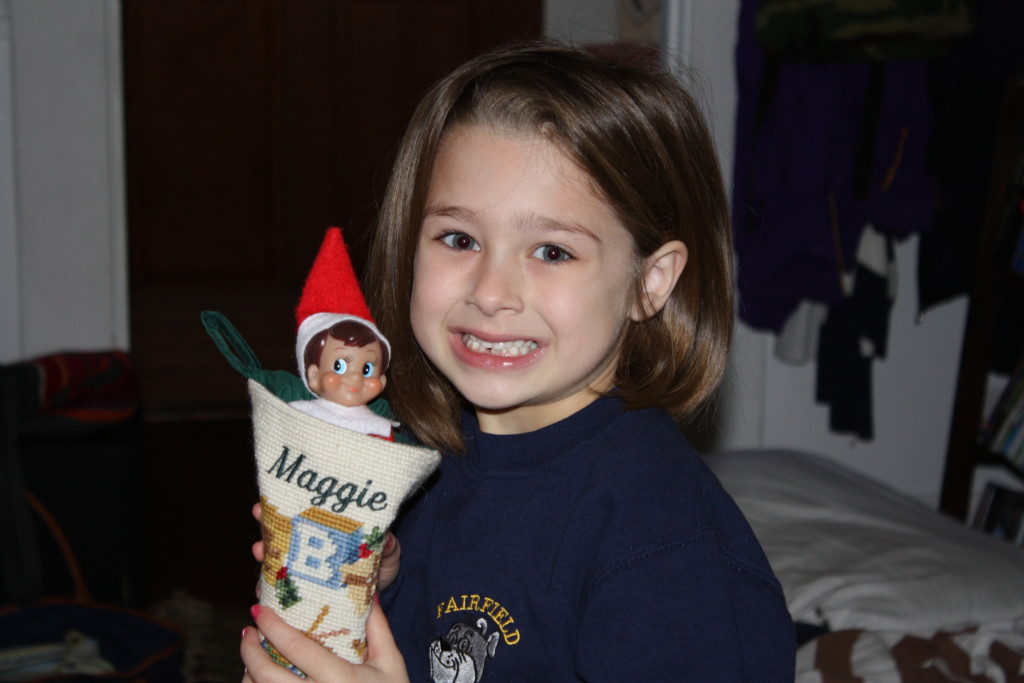 Have you ever traveled with an elf that you aren’t suppose to touch and who is suppose to magically appear every night, wherever you are?? It’s not easy. So I came up with the bright idea that only I can grab him with a towel and wrap him up and we’ll put him in a stocking to travel in inside the suitcase. “But can I hold the stocking in the car to keep him safe? I promise I won’t touch him.” Well, that was a fun car ride. I had no cinnamon on me to bring the dang thing back to life should someone touch him (That’s right. Google it.).

Somehow Elfie survived those yearly Christmas trips home, miraculously never left behind as we stopped at both grandparents’ houses to sleep. I remember my mother in law, seeing that Elfie had slumped over a little, just reached over and straightened him. “NANA TOUCHED THE ELF!!” Good gravy, woman! What don’t you understand about not touching a 12″ felt elf with a plastic face and ruining Christmas as we know it?!

I quickly learned that I couldn’t wait for Christmas day to appear … so the elf could disappear. 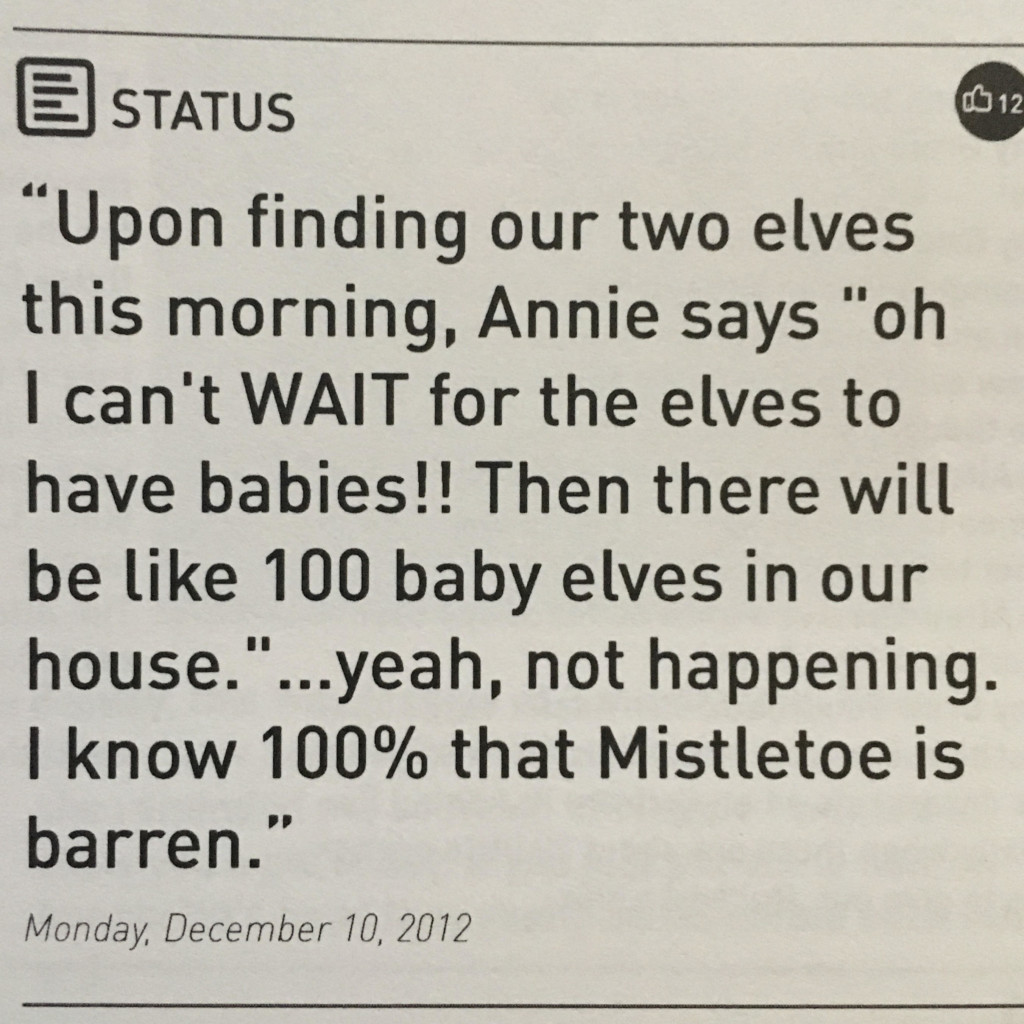 The next few years brought more obstacles as a fourth child was born into our household, and every night was sleepless and me crawling into bed was the crowning moment of my day. But alas, the elf would arrive and for 30 nights or so, as the household slept, the magic of the elf continued. Each year, as more and more of these Elves appeared in children’s homes, I found it hard to answer questions that came. “So and so said at school that he doesn’t have an elf.” I found it sad. How do you explain why some children get one and others don’t? Years later, I wised up and explained that Moms or Dads have to actually buy the elf at a store and bring it home. Once the box is opened, the magic begins. I told them that some parents just chose to not bring an elf into the house. Then there were the “Sally brought her elf to school! She said she can touch hers!” as I would cringe and big blue eyes waited for a logical explanation from me. Solidarity among parents is essential when lying to our kids, people! Come on! Then somewhere along the way, Mistletoe appeared at our house. A girl elf. Double the fun, right? I mean, if I have to crawl my tired behonkus out of bed, cursing one elf, I may as well curse two.

Then the wardrobe changes came. “Anna’s elf has the prettiest, white, sparkly tu-tu. I’m going to write Mistletoe a letter asking her to wear that one!” Speaking of letters, my oldest was constantly writing letters for Elfie to bring to Santa, requesting answers back. Circle Yes or No. Do you have a girlfriend? Next thing I know, I’m writing letters back with my left hand to obscure the handwriting.

Then we get to the point where we are now, with the outrageous, elf escapades.

“What did your elf do last night?” “My Dad set up an Elf Cam, and we caught him flying across the room after he toilet papered the house. He also left us monogrammed pajamas.” I can’t even.

I’m 9 years into this and this shiznits getting old. But alas, there are no signs of Elfie and Mistletoe aging. The fountain of youth is on their side, and as long as my littles believe, the magic will live on!

ABOUT US
Lafayette Mom is a locally-focused parenting resource for moms and families. Passionate about parenting and our community, Lafayette Mom strives to connect area moms to relevant resources, local businesses, can’t-miss happenings, and most of all — each other!
Contact us: [email protected]lafayettemom.com
FOLLOW US
Lafayette Mom© - 2023