A Cajun expression often heard in these parts, meaning “Let the good times roll!” conveys the “joie de vivre” (“joy of living”) of the good people of Lafayette. Now that’s about all of the French I’m going to pretend like I know and I actually googled that much. I would expect nothing less of Lafayette than letting the good times roll and knowing how to handle a party such a Mardi Gras!

I grew up about 1 1/2 hours east of Lafayette in the smaller city of Hammond. As a child, my mother wouldn’t hesitate to load us all up (5 kids) and drive us into New Orleans for a Mardi Gras parade. Mardi Gras season, that’s what we did. In and out of New Orleans for a day parade or a night parade. One year, we rented a room on St. Charles Ave, and for days, we enjoyed “the Mardi Gras.” In 1988, my father was King of the Eros ball in New Orleans, so I got to experience, as a child, the grand pageantry surrounding that circus!

As a college student, who attended USL (now ULL), here in Lafayette, I would still travel to New Orleans attending such balls as Endymion and Orpheus, hearing Harry Connick Jr. sing and attending parties with such celebrities as Whoopi Goldberg and Sandra Bullock. I knew what Mardi Gras looked like, sounded like, and smelled like (y’all know what I’m talking about!).

It wasn’t until I had kids and we made the decision 7 years ago to settle into Lafayette and make it our home that I began to notice Mardi Gras in Lafayette. I must say, I had no idea! From the pomp and circumstance of balls for weeks that reflect the New Orleans style Carnival to staying true to its Cajun roots and creating its own style Acadian Mardi Gras. I learned I didn’t have to travel to New Orleans to give my children the whole experience. I can travel back and forth 15 minutes from my own home to give them a world of parades and pageantry for the Carnival season!

Lafayette’s Mardi Gras history dates back to the late 1800’s when the King of Mardi Gras, King Attakapas, would ride into town on the Southern Pacific train to make a grand entrance! This grand arrival of Mardi Gras Kings continued until 1961! The Krewe of Gabriel, formed in 1949 to help expand Mardi Gras, is the oldest in the Lafayette Carnival Organization and one of the finest. King Gabriel and his counterpart Queen Evangeline are named after a poem titled Evangeline. A story of lovers separated during the Acadian exile of 1755, when many Acadians (Cajuns) came to South Louisiana. The Kings parade rolls through town on Mardi Gras day. Today, there are over 20 Carnival Krewes in the Lafayette area that involve teas, luncheons, and rehearsals for balls, keeping the men, women and children exhausted throughout the Mardi Gras season, but counting down the days till they can do it again!

One of the oldest Cajun style Mardi Gras traditions is the ‘Courir de Mardi Gras.’ Now this has Cajun Country written all over it! Over 100 years ago, it began with masked men in crazy outfits, riding horseback through town and from farm to farm, knocking on doors, while singing and dancing and begging for ingredients to make a gumbo! While New Orleans is busy throwing beads, the grand prize of this spectacle is when someone throws them a live chicken and the famed (in these small parts) chicken run begins! After the chicken is caught, the celebration ends in the cooking of a communal gumbo. This tradition has drawn people from all over the U.S to the Acadiana area for Mardi Gras!

With balls and pageantry and flying chickens, Lafayette and the surrounding areas also offer a number of parades. The weekend before Mardi Gras, we all get treated to the Krewe of Rio parade to kick the parades off. This grand parade does not disappoint. Lafayette offers two weekends of parades that follow into Mardi Gras day and with this comes … the barricades. The barricades are what first taught me about the size of Mardi Gras here. Our school has to shut down a day or two before the week of Mardi Gras because carpool and barricades don’t mix well. You think you might take an alternate route around town to get somewhere quicker because of the traffic caused by the barricades, but NOPE! Total gridlock. 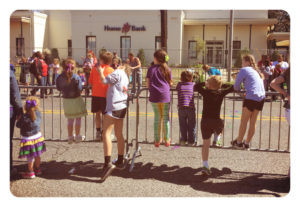 But with pain, comes gain…

The catching of beads and crap galore …
It always leaves the children shouting for more.
Will it be cold or will it be hot?
Throw me something Mister … look what I caught!!
The marching, the music, the memories that are made…
A South Louisiana Mardi Gras is nothing I’d trade.