The term redshirting comes from college athletics, where coaches “hold back” athletes from participating on the team until they have better developed skills so that they can extend their period of player eligibility and be more successful players. The term “academic redshirting” has become popular in regards to preschool/kindergarten age kids and the big decision of whether or not to delay their entrance into kindergarten to allow the child to better develop their skills and mature a little bit more. I’m not really here though to talk about the technical terms and what studies have shown. I’m here to talk about the emotional side of it. The difficult decision that lays in our hands and weighs on our hearts.

I didn’t even realize this was a thing or a decision that was to be made until my first child had finished preschool and the natural path was kindergarten up next! She was turning 5 on June 12th, so kindergarten here we come! But I watched several of my friends’ kids, all of whom had birthdays between June and September, either switch to another PreK4 program or go into a thing called a bridging class (we lived in Shreveport at the time). It was a class offered for kids who finished PreK4 but who weren’t quite ready for kindergarten. It allowed them that year to mature and practice skills, without feeling like they were being “held back.” What a fantastic idea! But it wasn’t for us. After all, she was 5 and moving on! June birthdays aren’t normally held back. That’s more for August and September birthdays. I had no idea what was in store for us and the struggles that would follow.

School isn’t what it use to be. At least in my memory. I watched her struggle with reading. I watched her struggle with homework. I watched her self confidence go down the drain. I took note that she was the 2nd to youngest in her class. From 1st grade to 6th grade, I found myself thinking what a difference it would have made had I held her back a year in the beginning, but there was no going back at that point. My next daughter was a November baby and I remember thinking, thank goodness! There was no decision to be made on her account. Then came my boys … both June babies … more summer birthdays.

By the time they were in PreK3, I started agonizing over the decision that was fast approaching.

I enrolled my first son into the PreK4 program at the school that they would be staying at through 12th grade, thinking I’ll just wait till the end of the school year to make my decision. I’ll see what his teacher says versus my pre-decision that he should be held back just because of his summer birthday, solely based on my experience from his sister. The whole year I observed the whole situation and analyzed it. I looked at birthdays on the chart of the classroom wall. Where does he fall in age compared to the rest? I watched birthday invitations come in starting in August. The kids were all turning 5 in August, September, October … My baby was just 3 a couple of months before! He was just potty trained! I sat in the parking lot one day and watched the kids walk in a line from the playground to the classroom and saw a kid that towered over him, poking him forward in the back, poking him forward, till he stumbled and he just put up with it. I thought about all of the material that my daughters learned in kindergarten and how that was just a few short months away. Was he ready for a full day of learning and sitting still and uniforms and belt buckles? Perhaps the hardest thing of all was that I watched him make friends. He loved his friends and I knew it laid in my 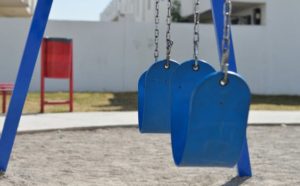 hands the decision to take him away from them. I loved their mothers and the whole class that he could be moving forward with. I can’t tell you how many tears were shed over that on my part.

At the very last parent teacher conference, the teacher knew all along that my plan was that I was probably going to hold him back solely due to his being one of the youngest. I turned to her for guidance and wanted her to give me a reason to make him repeat PreK4, but she couldn’t give me one. He was very bright, well liked, and all of his skills were on target. She could not advise me to hold him back. She looked at 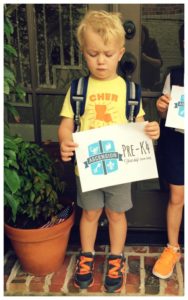 my tortured face and said, “Look, I’ve met a lot of parents that have regretted their decision down the road that they didn’t do it, but I’ve never once met a parent that regretted holding them back and giving them that extra year.” I needed to hear that.

My heart said let him go on, because it would be the easier decision, but my mind knew the wiser decision in the long run would be to give him that extra year.

I wanted no regrets. But was it fair to him? Was it fair to make a decision primarily based off of his sister and the regrets I had for her and the struggles that she had being one of the youngest? After all, each child is different, but as a parent, I didn’t want to go down that road again. I told myself that I refused to watch my boys struggle, if I could give them a chance not to. I refused to watch them lose their self confidence.

So I did it. I held them back.

The best part … their self confidence. Self confidence goes a long way. They have excelled in school. They are confident readers. They are loved by their friends, and their teachers tell me they are leaders. They handle homework maturely, and I can’t tell you what a blessing that is. This is what my heart wanted for them all along.

I have learned that sometimes the hardest things are the right things.

Not listening to your heart is a very hard thing to do as a parent, but sometimes it’s the brave thing.