I recently read a blog that talked about jumping in feet first. Doing things even though they may be inconvenient or not at the right time. “Take the trip” was the name of the blog post. Embrace life and don’t worry what others think. If it works for your family, DO IT.  One day, this won’t be your life anymore. Kids grow up, parents get older. Time is precious.

So much has happened just in the last 12 months that I realize it all goes by too fast.

Our oldest daughter immersed herself in soccer in the first grade. She played the cute “bee hive” soccer where everyone runs in circles around the ball. She loved it! Fast forward 2 years and she was asked to try out for Cajun Soccer Club. WOW! Really? I knew NOTHING about “club ball.” I’m not a true soccer mom.  Am I? The first step was a level called Juniors. For one year, the child and the family would be introduced to what select soccer required. Several practices a week and traveling out of town, Baton Rouge was as far as we would go. It was simple. Simpler than I ever thought. After Juniors, the girls tried out to take a spot on a select team in their age group. She made the B team. WHAT!?!?! She was so excited. Life as we knew it had changed.

We jumped in and took the soccer world by storm. She spent two years on a fantastic team. She made lifelong friends, and so did we. Traveling out of town, watching the girls grow up together. Meals with our soccer family even when we didn’t have to but just because we enjo 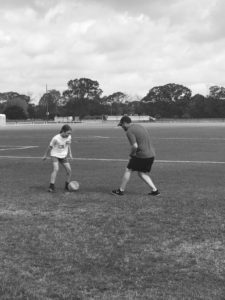 yed each other’s company. Then there was a state-wide birthdate change that affected her team. They were all shaken up, split up and moved around. Some kids moved up, some switched birthdate year teams, some stayed where they were. It was hard, but they got over it.

Year four and five took some getting used to. New families, new coach.  Would she love it as much? Would this change her mind? Low and behold, she settled in. We stayed in touch with the other families on different teams and made new friends on this team. Life was good. Two years flashed before our eyes. Now at the end of seventh grade, some kids had developed, some had not, and some had new interests. Our very young but very mature child decided not to accept the invite for a different team this year. She was sad, she was lost. Five years of soccer, friends, routine. This was the day. The “One day…this won’t be your life anymore” day. WE (it’s a family effort) took the plunge five years ago. It wasn’t convenient for us (during this time we added a new baby to our family!), but we did it anyway. For her. Having a child play on a travel / select team for any sport isn’t for every family, but it worked for us. I have always told my children, “If I can get you there (practice, rehearsal, meetings), GO! Get involved! Do something!”

Our little girls have grown up and soccer isn’t our life anymore, but we have moved on. While E isn’t old enough to have extracurricular activities [update: we have a ballerina!], Morgan has taken up volleyball, running, and theatre. Meaning, I need to rein in my outside soccer mom voice and learn that I can’t yell so loudly in the gym or at the stage.

Bottom line, don’t be afraid to try something new.

Don’t refrain from completely tossing your life upside down to step out of your box. Enjoy the ride!! Embrace this time and all of it’s challenges. It’s worth it. I promise.