Growing up, one of my aunts was a tickler. Except it wasn’t one of those nice, joyful, light touches in the tickliest of places. No, it hurt. Her rough fingers dug deep into pressure points – never inappropriate places. Never in private; nothing like that. It just hurt. And the word “stop” meant nothing to her. She thought it was hilarious.

All of the other adults around always clued into this and would make her stop. This happened once when we were driving on a family vacation in a camper. My dad had to pull the camper over and yell – not at the kids, but at my aunt who would. not. stop. I think she thought it was funny how worked up we would all get. She wasn’t exactly the most mature adult I’ve ever met. 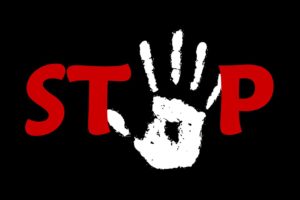 Stop means stop. This is a boundary that we all need to teach our kids – and it’s something that we, as adults, need to do as well. Our kids also need to know that “stop” is a safe word – that it is their go-to word if they do not like something that someone else is doing to them. They need to be able to trust that the word “stop” will elicit an immediate halt to anything that makes them uncomfortable. 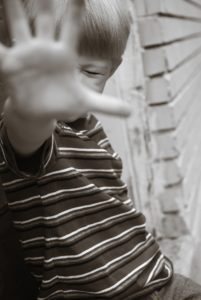 How do we teach behaviors and boundaries such as “stop means stop?”

Stop is a command and it should hold power. Unfortunately, there are situations when the word “stop” is ignored. Our kids need to know that it is ok to “tattle” if someone continues after they say “stop.” Our kids need to know that we want them to tell us if someone’s touch made them uncomfortable – whether it’s something as innocent as tickling, or if it’s something much, much more. Stop means stop.

(Also, when your sister says “stop looking at me,” just stop. I know she’s being dramatic and over-using our safe word, but I really just can’t hear her say it anymore. So, for my sanity, please stop looking at your sister.)