Two days after Christmas, I went through all of the toys in my son’s room and closet. I was “purging.” We had not really cleaned out his toy collection in a while, and it was time to get rid of the “infant” toys to make room for more “big boy” toys. 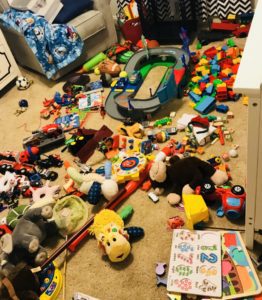 All I could think was, this kid has so MANY toys!

A few days after the purge, my sweet little guy decided he needed to play with ALL of the toys. He dumped everything out onto the floor of his room, dragging random toys out and placing them around the house. After telling him, asking him, pleading with him to clean up, then “showing” him how to clean up his toys, I hit a wall – figuratively. I told him in a very calm, controlled voice that he needed to clean up his toys. He did not pick up his toys as I asked. In fact, he defiantly told me no, laughed and ran out of the room.

Fuming, I grabbed a trash bag (or two).

In all of my monster mom glory, I picked up all of the toys he had taken out and put them in trash bags. I then put the trash bags in his closet when he wasn’t in the room. I explained to him that because he wouldn’t listen and follow directions, his toys were going in the trash. He looked me in the eye and said okay mommy. Insert eye roll from me here. I truly thought he would have a huge tantrum when I told him I was throwing away his toys and followed through on it. There were no tears, tantrums or questions asking where his toys were. He happily played with the one toy and coloring books he had left in his room. He spent more time playing with his magnets on the fridge, running around and asking me to play with him. 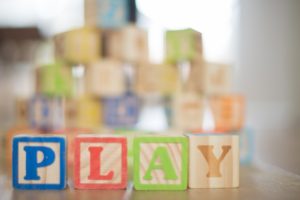 I already knew this, but it was brought to the forefront yet again. It’s not the stuff he needs. It’s the interaction. The ability to use his imagination while he plays. He found other items around the house to play with. He entertained himself, and I realized that he will be just fine without three police cars, four helicopters, five hundred duplo blocks and what seems like one thousand hot wheels. The trash bags full of toys stayed in the closet for two weeks before he discovered them. He did not miss them.

I have since put toys in trash bags on two separate occasions when he wouldn’t clean up, but I’m not sure if it is truly a punishment for him. He finds other ways to play and entertain himself, and for that I am grateful.  I am, however, taking advice on consequences for not cleaning up when asked.

What do you do when your child/children don’t clean up when asked?